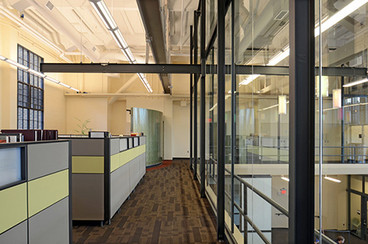 The Computational Hypersonics Research Lab is developing computational fluid dynamics methods and simulation tools for the design and analysis of future hypersonic flight systems. Graham Candler leads the research group, in close collaboration with the Nichols and Schwartzentruber research teams at the University of Minnesota. The research is supported by the Air Force Office of Scientific Research, the Office of Naval Research, the Air Force Research Laboratory, Sandia National Laboratories, and NASA.

The overall goal of the Lab is to develop physics-based models and high-fidelity numerical methods to predict the operation of hypersonic flight vehicles and to discover new hypersonic flow physics. The main tool is US3D, which is a highly parallel, implicit, unstructured grid code designed for the simulation of complex-geometry hypersonic flow fields. Simulations can be performed with conventional second-order upwind numerical methods and high-order, low-dissipation methods. This enables rapid solutions for steady-state problems, and the simulation of more complex flows that require the resolution of fine-scale features or unsteady effects. Thus, the US3D code can be used to simulate full-vehicle configurations to predict aerodynamics and aero-heating, but it can also be used in large-eddy simulation (LES) or direct numerical simulation (DNS) mode to resolve complicated flow physics. A complete set of finite-rate chemical kinetics models for high-temperature air are included, and novel low-order manifold approaches are being developed for the simulation of high-speed scramjet combustor flows.

One of the primary areas of focus in the Lab is on predicting how hypersonic boundary layers transition from a laminar state to a turbulent state. Understanding this process is critical because the transition to turbulence typically increases the heat transfer rate to the surface by a factor of three to eight. Transition prediction is usually performed with linear stability analysis methods, in which an assumed disturbance mode is tracked through the laminar flow field and the rate of growth of the disturbance is computed. Then, when a specified relative amplitude is reached, the boundary layer is predicted to be critically unstable, leading to the transition to turbulence. Such an approach has been shown to work for simple hypersonic flows like sharp cones at zero angles of attack, but it becomes increasingly inaccurate as the geometry becomes more complicated.

At the University of Minnesota, we have been using the advanced simulation methods in US3D to explore more general approaches to predicting transition, including using methods from the linear systems literature and direct numerical simulations on very large grids with high-order numerical methods. The figures below show the results of a 160 million grid element solution on the AFOSR Boundary Layer Transition (BOLT) sounding rocket hypersonic flight experiment; Figure 1 shows the surface heat transfer rate, and Figure 2 visualizes instabilities that grow in the BOLT flow field. These simulations are being compared with experiments; so far, everything is consistent with the data. 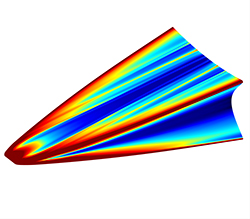 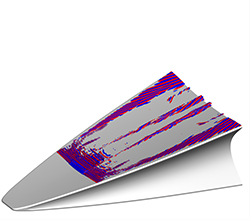 The research is also developing advanced physics-based models for high-temperature air reactions, novel finite-rate kinetics models for carbon oxidation and ablation, new approaches for representing turbulence at extreme conditions, and the ability to simulate the interaction of particulates in the free-stream with the flow field. The US3D code is being combined with the Molecular Gas Dynamics Simulator (MGDS) code being developed in the Schwartzentruber group to predict hypersonic flows at conditions where the continuum Navier-Stokes equations are not valid. Recent simulations of high-speed combustion with inexpensive low-order manifold approach representing the combustion process show promise for the development of predictive simulations of scramjet flow paths.