The career path AMY VENNEWITZ followed might seem unconventional for an engineer. She has spent most of her career in government, involved in policy, planning and financing state and regional transportation systems. “Some services are most efficiently thought about and supported at a regional level,” says Vennewitz. “A big picture view makes sense for transportation, water and wastewater, land use, and parks. It is often most efficient to think about these important systems at a higher level rather than having each community plan independently.”

Vennewitz worked in Minnesota’s non-partisan Senate Counsel, Research, and Fiscal Analysis Office for over a dozen years under both republican and democratic administrations. Then she moved to her current position as Deputy Director of Transportation Planning and Finance for the Metropolitan Council of the Twin Cities. Planning and implementing a plan across seven counties takes continual attention. Her responsibilities draw heavily on her skills in communication and collaboration. Her days involve talking with, listening to, and learning from policymakers, co-workers, MnDOT, Metro Transit, and the regions, cities, and counties. All these ideas and desires are compiled into a comprehensive transportation investment plan for the region. Transportation planning is subject to regional, state, and federal requirements. Federal law states regional transportation plans must be updated every four years. Vennewitz has learned, “You can never talk to people too much! You have to ensure they feel engaged, that they have their say, and that you are responsive to them.”

When creating the 2018 regional transportation plan, the Council worked with the Transportation Advisory Board, which is composed of regional members and local elected officials. They met with the policy boards, public works, and planning staff of each of the seven metro counties, as well as some of the counties on the edge of the metro area. They went to the City Councils of Minneapolis and St. Paul. Policy-makers and technical staff had opportunities to raise concerns. There was a public comment period for all local governments, residents, and stakeholders. Changes and updates were made based on the input received. The final plan will be adopted in October.

Vennewitz is effective because of her deep conviction about the public process. “Sometimes I have been afraid that a committee or a group would not be able to come to agreement or come up with a good solution, but amazingly they almost always do. The process works!”

Engineering students are often eager to get involved in large, public projects, yet many are unaware of what is involved in making them happen. Civil engineering projects—water resources, wastewater treatment, bridges, transportation— serve communities, use public land and public funds, follow government guidelines, and often require action by elected officials.

Vennewitz talks enthusiastically about the mentors that helped her each step of the way. It was her high-school math teacher who suggested she go into engineering and introduced her to Women in Engineering (WIE), a program that encourages young women to enter engineering fields. Through WIE, Vennewitz’s interest and competitive spirit were roused toward civil engineering. She recalls thinking, “I am going to be one of the few women to do civil engineering. And I’m going to be good at it.” For her, engineering was always about making a difference for the public on a large scale

Her first college internship came through a family friend who helped Vennewitz get a job on a survey crew with MnDOT. That’s when Vennewitz met Adeel Lari, who then hired Vennewitz as an intern in what was then the Traffic Management Center in downtown Minneapolis. Vennewitz and Lari (now at UMN in the Humphrey School of Public Affairs) have stayed in touch and have worked together in various capacities. It was that first internship that set her trajectory in transportation.

When she graduated—good grades and a passion for the environment notwithstanding—employers seemed most impressed with her hands-on experience with cutting-edge technology at MnDOT and the TMC. She was hired by SRF. “Those three years still influence my work. I still know people there; sometimes I’ll meet someone from SRF and they’ll know I worked there. Even small connections can be long-lasting.”

BLESSED BY THE GODFATHER OF MINNESOTA TRANSPORTATION

After SRF, Vennewitz worked with Dick Braun, a.k.a. “the godfather of Minnesota transportation.” Braun had been the Commissioner of Transportation and was starting up a new research facility, the Center for Transportation Studies (CTS) at UMN. “I was his first hire at the Center. At that time I didn’t realize what a great opportunity it was to work next to Dick Braun and learn from him. Dick Braun was very influential in the field of transportation. The Transportation Commissioner and legislators called often. I cannot overstate how great an opportunity it was to work with a mentor of his stature. He passed away, but he will continue to be influential for decades.”

“Dick often told me, ‘Figure out what you want to do and create a job that lets you do that.’ He did that his entire career. He knew he wanted to be the commissioner; he made that happen. He wanted to create a center for transportation studies, so he got the money and formed the center. I learned from him— by word and by example—that I could make my career what I wanted it to be.”

While working at CTS, Vennewitz attended evening classes to complete her Masters of Public Policy through UMN’s Humphrey School of Public Affairs. Determined that she wanted her next job to be on the political side, she tapped into another networking resource.

“I got involved with the Women’s Transportation Seminar (WTS) at SRF. Some of my longest and strongest friendships have grown out of that group. I appreciated having women who understood my work and the issues I faced at work and who supported one another. Women bring important perspectives and skills to the table and make projects and solutions better with their input.” 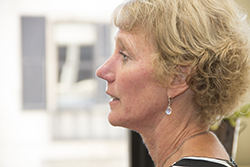 During her work at the Senate, Vennewitz interacted frequently with Nacho Diaz, a leader in metropolitan transportation planning. Diaz was influential in attracting Vennewitz to her current position at the Met Council. “My jobs in the Senate and the Council offered the best possible combination of activities and topics for me! I have loved all my jobs and was able to create the career that was a perfect fit for me.”

In the spring of 2018, Vennewitz received the Center for Transportation Studies’ Ray L. Lappegaard Distinguished Service Award. Vennewitz was honored and humbled, “Having my years of work recognized was a great feeling of accomplishment.”

Vennewitz recently received another tribute that any parent can appreciate. Her oldest son (studying agricultural sustainability at Humboldt State University in California) recently said to her, “Mom, I need to tell you I’ve underestimated you and what you have done in your career.” And her younger son, only 13, expressed a desire to explore a transportation-related career. Vennewitz has achieved a career that impresses not only her colleagues but also her children. A great accomplishment indeed!

“I have reached the stage in my career,” Vennewitz says, “where my mentors were. It has been fascinating to be involved for so long, to see the transitions, and to now be working in this position. The circle has been completed. It is now my role to be the mentor.”

“Engineers in school today are going to see a whole new, revolutionary transportation system! When I was growing up, we had highways, we still have highways; we had busses, we still have busses. But transportation is heading for a revolutionary change! Not for the first time: the move from horses to vehicles was revolutionary; railroads were revolutionary. It will be very different from traditional transportation engineering. We will be thinking about automated vehicles, shared mobility, energy for electric vehicles, software applications, changing interactions between people, land use—a lot of disciplines will be brought together to make it all happen.

“Part of me wishes I was just beginning. Transportation is going to be a super place to spend a career!”

If you are interested in getting involved with mentoring students, CEGE offers opportunities through the Capstone course, the CSE Mentoring program, CEGE Internship Opportunities Program, and, more informally, through occasional opportunities to speak to student groups. Contact Joe Labuz to hear about the options and find the opportunity that is right for you.