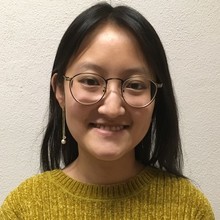 In her own words, Jiaxin’s research “focuses on developing new machine-learning-driven methods for highly efficient and accurate photochemistry dynamics simulations. The aims are to understand the mechanism for multistate photochemistry processes and further shed light on the design of solar materials.”

Jiaxin recently published a paper on “The Valence and Rydberg States of Dienes”. Polychromophoric assemblies are widespread in both biological systems and functional materials, and the 1,4-cyclohexadiene molecule and 1,3-cyclohexadiene molecule are classic prototypes for investigating the electronic structures of molecules with interacting conjugated and conjugated double bonds. These molecules have been studied in detail both experimentally and theoretically, with the experimental assignments being especially complete. The existence of Rydberg states interspersed with the valence states makes the quantum mechanical calculation of their spectra very challenging and has led to uncertainty about the extent of valence–Rydberg mixing. This paper, for the first time, demonstrates that one can calculate the whole spectrum of valence and Rydberg states in a consistent fashion. The agreement of theory with experiment is remarkable. A special characteristic of Jiaxin’s analysis is the calculation of the second moments of the excited-state orbitals, which is a new feature that she added to the software. These moments give a more accurate picture of the diffuseness of the excited-state orbitals in these prototype molecules than has previously been available. This is a novel contribution to this problem of widespread interest.

A second recent publication from Jiaxin describes unique calculations of the bond dissociation energy of sixth-row-metal compound. Relativistic effects must be treated consistently in the molecule and the dissociated ion, and the treatment of Ce+ is quite involved and quite interesting while requiring the development of new strategies. Jiaxin found that the ground state is different with and without spin-orbit coupling. She also found that the ground doublet state of Ce+ is an intra-atomic hyper-open-shell state. Out of 40 multireference and single-reference methods tested, only seven get the identity of the spin-orbit-free ground state right. The dissociation energy calculations show that the quantitative chemistry of bonds to sixth-period metal atoms presents a serious challenge to quantitative quantum chemistry. This paper establishes a standard in the field for treating bonds to heavy metals.

In the words of her advisor, “Jiaxin faces each challenge with confidence and is undaunted even by state-of-the-art challenges. Her combination of quantum mechanical and computational know-how and productivity are impressive.” Jiaxin received her undergraduate degree in chemistry from Nankai University, and joined the University of Minnesota Department of Chemistry for her PhD studies in 2019. 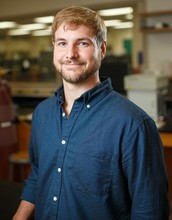 Chris’s research involves the development and application of new vibrational spectroscopic techniques to understand the mechanisms involved in plasmon-mediated photochemistry, and he has been remarkably successful in advancing a number of research projects in this area, including pursuing commercial applications of one of his patented discoveries. He developed methods to use nontoxic sustainable nanomaterials for plasmonic sensing, leading to authorship on a peer-reviewed publication in Nano Letters, a premier journal in the field. He developed a new means to spatially control reactivity in a plasmon-driven methyl migration reaction, a result obtained through spectroscopy, modeling, and theory. Most recently, Chris has been working on an invited paper for Accounts of Chemical Research, detailing broad contributions to the use of Raman spectroscopy in understanding plasmon-mediated molecular processes.

Chris has recently made an exciting discovery, showing that nontoxic earth-abundant nanomaterials can readily convert infrared light into visible light. This is a process called upconversion, and existing materials which can upconvert light typically require intensities well beyond those achievable with sunlight, due to the highly nonlinear nature of the upconversion process. The materials that Chris works with have remarkable optical properties, and can upconvert light at very low fluxes, such as those provided by focused sunlight. He envisions these materials, once optimized, to be highly successful as a coating on photovoltaic devices, which would harvest currently unused near infrared photons and convert them to visible photons which can be harvesting by existing solar cells. Chris is a co-author on a patent on this work, and has made connections with our Technology Commercialization Office, including giving an invited presentation to the Business Advisory Group. He has been in discussions with solar cell companies nationwide to discuss commercialization of this work, and is considering co-founding a startup after graduation to pursue this very exciting and important work.

Chris received his undergraduate degree in chemistry with minors in mathematics and physics from Indiana University South Bend, and joined the University of Minnesota Department of Chemistry for his PhD studies in 2017. He is also the recipient of a Renewable Energy Commercialization Grant and a Doctoral Dissertation Fellowship.