Regenerative medicine is the physiological equivalent of turning back the clock—by replacing diseased or damaged organs and tissues with healthy, proliferating cells that can restore normal function.

At the core of many approaches to regenerative medicine are stem cells, which have the ability, depending on environment and chemical stimuli, to turn into any kind of specialized cell.

Some researchers at the University of Minnesota are working to direct stem cells to take root at the site of an injury and repair or replace damaged tissue. Others are trying to induce specialized cells, such as heart muscle cells, to behave more like stem cells, by dividing and proliferating to replace dead tissue.

Regenerative medicine received a jump-start in Minnesota in 2014 when the Legislature created Regenerative Medicine Minnesota, providing about $4.5 million a year for 10 years for stem cell research and education throughout the state.

Here's one example of how state, federal, and private support has boosted the work of University of Minnesota scientists who aim to enhance stem cells’ ability to heal our mightiest muscle—the heart.

When scientists discovered they could turn pluripotent (reprogrammable) stem cells into cardiac muscle cells in the laboratory with nearly 100 percent success, they started searching for ways to use these muscle “progenitor” cells to repair heart damage from an injury such as a myocardial infarction.

Initially, they tried growing suitable progenitor cells in the lab and injecting them into the heart near the site of the dead muscle tissue, but they soon discovered that few of these cells took hold to produce living, beating tissue.

Brenda Ogle, Ph.D., an associate professor in the University’s Department of Biomedical Engineering, tried something different. She printed a mesh 3-D heart “patch” of natural collagen and other protein and seeded it with heart cells derived from human stem cells, a technology she describes in a paper published early this year in Circulation Research. 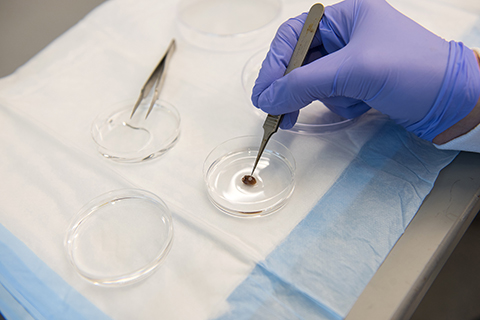 The heart patch for mice is about the size of a sequin. Now the team is working on a larger patch for pig hearts, which are more similar to human hearts. Credit: Brenda Ogle

“The impetus comes from our desire to organize the cells before putting them into the heart—that was the idea,” said Ogle, who is a member of the University’s Stem Cell Institute and Lillehei Heart Institute.

“If we can organize them and they can propagate a signal from one side of the patch to the other,” she said, “they should be able to bypass the scar or the injured area.”

But not just any mesh will do. Conventional 3-D bioprinting produces a mesh that’s too coarse; the stem cells don’t settle in and interact with the matrix around them.

Working with colleagues at the University of Wisconsin, Ogle used a printing technique known as multiphoton fabrication to lay down a protein mesh with gaps as small as a single micron (one-millionth of a meter), about 100 times finer than most 3-D bioprinters can produce.

“That was the critical part,” Ogle said.

The team implanted the mesh with about 50,000 heart muscle cells, smooth muscle cells, and endothelial cells (which line blood vessels) derived from human pluripotent stem cells. The cells settled into the mesh, spontaneously aligned with one another, and began to contract and relax like normal heart muscle cells—“a very promising outcome,” she said.

“When we found [the mesh patch functioning like a heart muscle],” Ogle added, “we knew that here was something we should try to transplant in an attempt to improve function of a failing heart.”

Ogle’s group transplanted patches into mice, placing the sequin-sized mesh over a portion of the heart damaged by a myocardial infarction. After four weeks, more than 11 percent of the transplanted cells had survived and merged with the mice’s heart tissues.

Though the hearts did not beat as strongly as normal mouse hearts, the team found a significant increase in function, Ogle said.

Now Ogle is working on a National Institutes of Health grant to perform similar transplants in pigs. She envisions a day, perhaps within just a few years, when the mesh patch is seeded with human pluripotent cells from a stem cell “bank” and implanted in a patient within hours of a heart attack—truly mending a broken heart.

Story by Greg Breining. Republished with permission from the Medical Bulletin, a publication of the University of Minnesota Foundation and Medical School.

If you’d like to support innovations within the College of Science and Engineering, visit the CSE giving web page.