About 30,000 human genes, made up of about 3 billion base pairs, encode proteins to build cells and enable them to function. Researchers rely on a process called a genome-wide association study, or GWAS, to troll through the tremendous data sets that represent human genomes to find associations with traits such as risk for disease. These kinds of studies have implicated more than 90 common mutations among these genes as factors in breast cancer.

But these mutations explain only perhaps a third of “what we know to be inheritable,” said Chad Myers, associate professor of computer science and engineering.

Myers and a team of researchers believe much is happening behind the scenes. From his work in yeast cells, Myers knows that certain combinations of two mutations, neither of which alone is damaging, may cause harmful or even lethal effects.

Seeking answers and winning a contest

Analyzing the correlation between breast cancer and thousands of mutations is tough. But looking for correlations with thousands of genes in combination is astronomically more complicated.

By developing a unique computational method to do just that, a team led by Myers recently became one of two grand prize winners in the National Cancer Institute’s “Up for a Challenge (U4C) Breast Cancer Challenge Award” offered in partnership with the nonprofit research organization Sage Bionetworks.

Myers gives Ph.D. student Wen Wang much credit for leading the analysis. Also key was Carol Lange, a professor in the Departments of Medicine and Pharmacology, who, like Myers, is a member of the Masonic Cancer Center.

“We really wanted to team up with someone who works on breast cancer every day and understands the details of the biology behind it,” Myers said, of partnering with a colleague from medicine and pharmacology.

The U4C competition invited teams across many disciplines in academia and industry to use new approaches in finding genetic variants or combinations of genes associated with breast cancer to develop new hypotheses about how the disease begins and progresses and how it might be treated.

As part of the contest, the National Cancer Institute provided ve genetic data sets, ranging from several hundred patients to a couple of thousand, from European, Chinese, and Japanese populations. The sets included breast cancer patients and a corresponding cancer-free group matched by age, ethnicity and other factors.

The data was “a big deal,” said Myers. “Even though it’s public data, it’s often hard to get your hands on.” 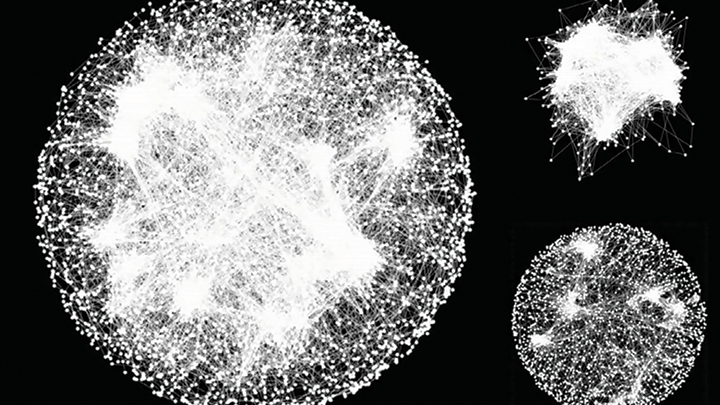 Genetic interaction maps, like the one above, provide a computer model to show how the functions of different genes in a yeast cell connect.

Myers’ work on these combinations, known as genetic “contractions,” in yeast, allowed his team to anticipate the pathways where such contractions might appear in humans.

“They are rare, but when they happen, they happen in very specific structures,” he said.

As one of the UHC award winners, Myer’s team was invited to expand on their work for the journal PLOS Genetics. For the paper, they looked for genetic interactions in all three ethnic groups.

“It gives us more confidence that they are real, because you can see it in completely different ethnic backgrounds,” he said.

Realizing that identifiable combinations of mutations are causing cancer advances both basic science and clinical medicine.

“When we do identify a genetic basis, pathways that contribute to the cancer, those are potential targets for drugs,” Myers added.

If you’d like to support innovations within the College of Science and Engineering, visit the CSE giving web page.