You've probably worn polyester clothes, and you’ve certainly used plenty of plastic objects and paint. But did you know that they come from natural gas?

The main component of natural gas, methane, has just one carbon atom and is the smallest fossil fuel. But as the ultimate source material for the above products and many others it packs an enormous punch. First, however, it must be converted to methanol, an alcohol—and there lies the challenge.

Methane becomes methanol with the addition of just one atom of oxygen. But this requires a high temperature and high pressure—ideal conditions for oxygen to simply burn the methane. A catalyst for the conversion that worked at room temperature and atmospheric pressure would mean big energy savings and a “bigger bang for the buck” in the use of shale/natural gas. 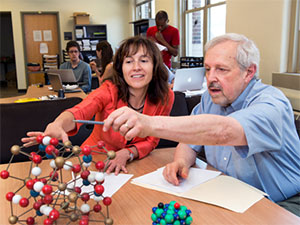 U chemistry professors Laura Gagliardi and Don Truhlar, along with U graduate students and colleagues at UC Berkeley, took up this challenge by starting with the simpler but closely related problem of how to convert ethane—a two-carbon molecule—into ethanol at room temperature and pressure. In short, Berkeley built a catalyst and the U researchers used advanced computations to explain how it worked.

The ability of state-of-the-art computations to explain how catalysts work points to a day when the development of new catalysts will proceed much faster, saving even more time, money, and energy.

A cue from nature

In designing a catalyst, chemists must build in a particular arrangement of ligands--molecules (or molecular fragments) that chemically bond to the metal atom and, like a cradle, hold it in place. The Berkeley group built the new catalyst by taking a page from nature.

The catalyst is a MOF (metal organic framework), similar to hemoglobin in that an intricate organic lattice of ligands holds an atom of iron in place and allows it to interact with oxygen. The MOF framework is full of pores for ethane and nitrous oxide (the source of the oxygen for the conversion) to flow through and access the iron.

“Ligands bite the metal in several places, like clamps,” says Truhlar, a Regents Professor. “You can put different ligands on the framework to ‘tune’ the metal.”

In this case, the chosen ligands tuned the iron to catalyze the transfer of an oxygen atom from nitrous oxide to ethane, forming ethanol. This exemplifies the big advantages of MOFs: their versatility and design potential. Researchers can mix and match both metals and ligands to optimize performance.

The computations by the Minnesota team used quantum mechanics to explain how the reaction proceeded to produce ethanol as the major product.

“Now we can look at the building blocks of existing MOFs and predict their behavior,” says Gagliardi. “They are good for catalysis or separations, like removing carbon dioxide from flue gas. We can simulate experiments and tell people, ‘this material is promising for such-and-such a separation or catalysis.’”

This success, says Truhlar, “validates the whole vision of the University’s Nanoporous Materials Genome Center [NMGC].” Funded by the U.S. Department of Energy, the NMGC brings together researchers from several institutions to build and share knowledge about exciting new materials like MOFs.

If MOFs live up to their promise, they will drastically reduce the environmental costs of modern life. Gagliardi, Truhlar, and their students and colleagues look forward to playing leading roles in that adventure.

The work is published in the journal Nature Chemistry.

Founded in 2012, the U’s Nanoporous Materials Genome Center is funded by $8 million from the U.S. Department of Energy. It focuses on the structural frameworks of new materials with pores for both catalysis and separations of chemicals. In June 2014 the U received $12 million from DOE for a new Inorganometallic Catalyst Design Center, which focuses on catalytic entities with metal atoms in new atomic environments that eliminate unwanted side reactions. Laura Gagliardi, the NMGC director, will direct the IDCD, with chemistry professor Ilja Siepmann succeeding her as NMGC director.