If you’ve been to the dental hygienist, you have firsthand experience with biofilms. When the hygienist begins scraping your teeth, he or she is removing a biofilm—a tough, living tissue made up of one or more types of microbe. Biofilms have positive uses, such as in water filtration, but they also grow in places we don’t want them. Microbes that create troubling biofilms are colonized in water pipes, teeth, lung tissue, heart valves, and implants such as catheters and prosthetic hips.

Ray Hozalski, a professor of civil engineering, who first became familiar with biofilms as a graduate student, is working on their use in water filtration systems. He explains that the films are tough. Current removal methods are either physical—by scraping, for example—or through the use of a disinfectant or antibiotic.

“When biofilms form on surgical implants the recourse is to try to blast them with antibiotics— which have trouble breaking through—or to surgically remove the implant and put in a new one. Finding some other way to remove these would be a major benefit to the medical field and environmental fields. It is better to try to weaken them and then flush them out, because they are difficult to kill,” Hozalski said.

“Maybe we can develop a Trojan horse—a strain of bacteria that we add to the biofilm environment that could release an enzyme that degrades the biofilm.”

Hozalski has begun working with Gary Dunny, professor of microbiology in the University of Minnesota’s Medical School. The two are seeking ways to manipulate the strength of biofilms. Dunny is a specialist in enterococci, intestinal bacteria that cause a number of infections. For example, enterococci can develop a biofilm-like colony on the surface of heart valves, leading to endocarditis. 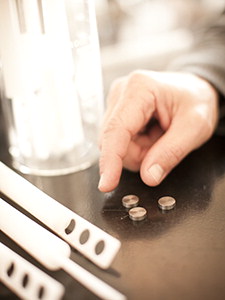 Dunny and Hozalski, both members of BTI, met through a biofilm discussion group at the University, which involves people in microbiology, environmental engineering, dentistry, medicine, and other departments. Through the partnership, they are exploring ways to change the mechanical properties of biofilms by manipulating the ecology of the films, which often contain multiple types of microbes.

“Maybe we can develop a Trojan horse—a strain of bacteria that we add to the biofilm environment that could release an enzyme that degrades the biofilm,” Hozalski said. He suggests that this enzyme release could be triggered by various means, such as changing the acidity or oxygen level of the environment. The long-range vision is a bacterium engineered to enter the biofilm benignly, and then switched on to modify the biofilm in the desired way. This could be applied to medical and other purposes.

Hozalski and Dunny have a ways to go before they arrive at practical applications. So far, the team has created biofilms of different proportions of enterococcus and staphylococcus. They have been able to weaken some biofilms, but they have not yet determined the causes. “We have a lot more work to do to tease out the cause. BBut you can imagine that we could isolate the responsible enzyme, figure out its structure, and then synthesize it chemically or biologically and use that to weaken the biofilms,” Hozalski said.

Hozalski is pleased the work may benefit both medical practice and environmental engineering, an outcome of the collaborative process. “I’m an engineer. I’m used to working in engineered systems, while Gary is used to medical systems. It’s great that we have this shared interest in biofilms and complementary expertise,” he said.