Editor’s note: IonE’s nearly 70 resident fellows — faculty with appointments throughout the University of Minnesota system who come together here to share ideas, inspiration and innovation across disciplinary boundaries — are among the shining stars of IonE’s signature approach to addressing global grand challenges. Over the course of the next year, this series will introduce our diverse resident fellows in their own words. Here we interview IonE resident fellow Shashi Shekhar, McKnight Distinguished University Professor in the College of Science and Engineering. Let the conversation begin!

What pivotal experience led you to the work you’re doing today?

It is hard to believe that paper maps were used for routing and navigation until the early 1990s, when we worked on research projects exploring spatial computational questions underlying envisaged handheld and in-vehicle GPS-based navigation devices. It was challenging since large road maps challenged the conventional wisdom that “640K (bytes of computer memory) ought to be enough for anyone.” Today, GPS-based navigation apps are commonplace and have transformed our society. They have also reduced fuel waste — and related greenhouse gas emissions — due to fewer drivers getting lost in unfamiliar areas. This experience has strengthened my interest in potentially transformative research by envisioning better futures for our society and taking the first steps toward that by exploring promising approaches.

What environmental challenge concerns you most?

The water, energy and food security nexus in face of climate change and population growth.

What was your biggest ah-ha moment?

What was so special about early the 1990s to trigger our journey towards ubiquitous navigation apps like Google Maps? I believe that it was a confluence of critical disruptive technologies. Spatial data — GPS signals and accurate digital road maps — became available to the public. Popular computers grew powerful enough to crunch large (gigabyte) national road maps to find the shortest paths in a few seconds. The Internet and World Wide Web allowed aggregation of large audiences even for niche services such as routing and navigation.

Recently, I co-organized a workshop titled “From GPS and Virtual Globes to Spatial Computing 2020″ at the National Academies to catalyze community research visions. Listening to the industry, government and academic leaders at the workshop, I had a moment of sudden insight. As Yogi Berra would said, “Deja vu all over again.”

I felt that we are witnessing another crucial confluence of disruptive technologies, such as Uber, WAZE, smart cities, and connected and automated vehicles. These technologies provide spatial big data describing our movements in unprecedented detail and can provide fundamental new insights towards shaping the future. For example, it may reshape our aging cities and transportation services to not only reduce our carbon footprints but also improve our mobility and quality of life. It may even change our social and economic life by providing new ways to connect mobile people to other people, goods and services during commute and travel. 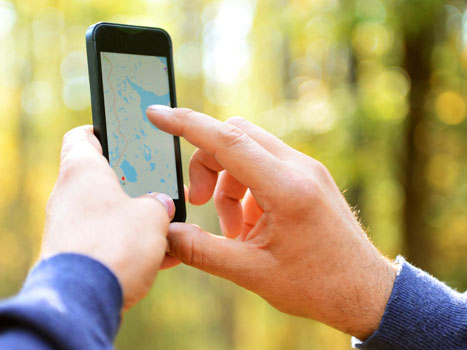 What is your current favorite project?

With NSF support, we are investigating spatial big data toward next-generation navigation services such as eco-routing. Imagine the next version of a navigation app (successors of Siri or Google Maps) that recommends routes to minimize fuel consumption or greenhouse gas emissions by avoiding engine idling at left turns, unnecessary elevation changes, etc. We are also investigating data-driven approaches to understand climate change and starting a collaboration with a major automobile company to reimagine mobility services in our increasingly urbanized future.

Reprinted with permission from the Institute on the Environment.