Friends, to the moon and back

On July 20, 1969, Tom Olson was in his Minneapolis apartment a dozen blocks from campus. Gary Ashley was with his mom in Bemidji, Minn., and George Ceman was on the West Coast sitting on a living room floor with his roommates.

This trio—then recent graduates of the aeronautical engineering program (now aerospace engineering and mechanics) at the College of Science and Engineering—are among the more than 600 million people worldwide who watched the Apollo 11 moon landing.

“Everyone that had a TV was glued to it,” recalled Olson.

“I was living in a two-bedroom apartment in Torrance, Calif., with three other University of Minnesota engineering grads and we were watching the first walk on the moon on my newly purchased 25-inch color TV,” Ceman said. “We had no furniture, only the TV—that took all of my first paycheck to buy.”

On July 20, 2019, Ceman, Olson, Ashley, and six former classmates now living in cities across the United States—along with their spouses or partners—gathered in Ashley’s backyard.

They not only toasted that first lunar landing, but the longevity of their friendship and the positive opportunities that came with their University of Minnesota education. The Saturday gathering followed a full-day campus tour and lunch the previous day. 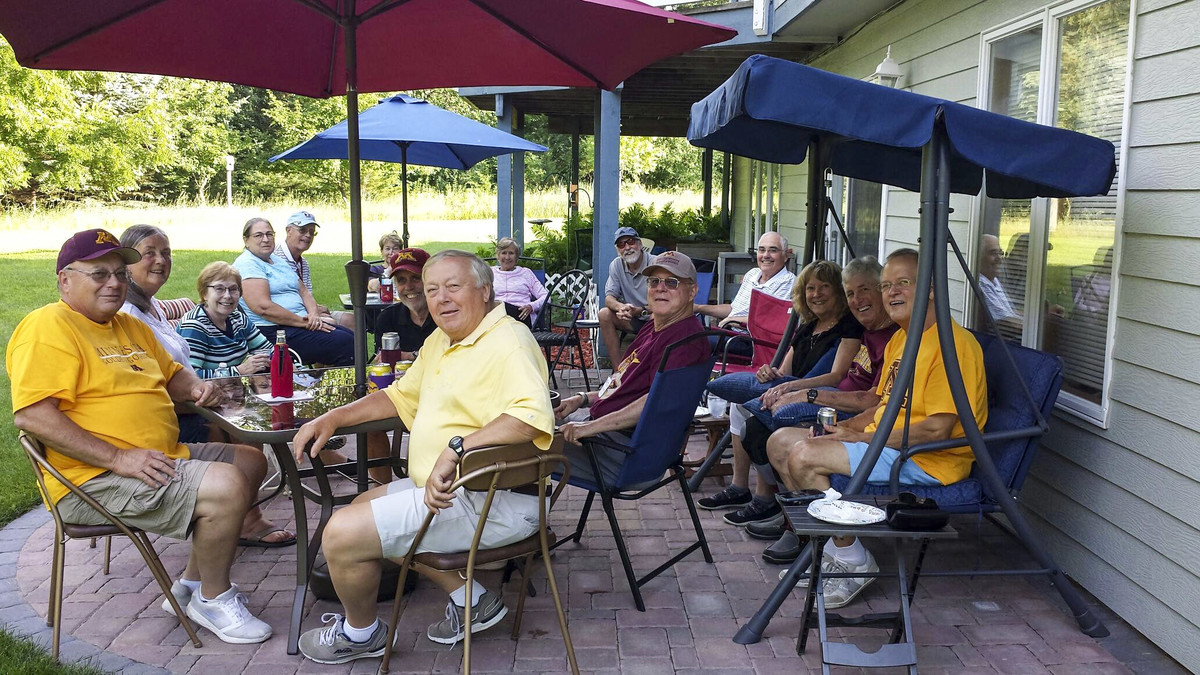 “Our class of about 65 was a closely knit group on a campus of tens of thousands of students,” Ashley said, of the aeronautical engineering students who graduated that summer of 1969.

“We all had to take the same classes, so we’d see each other every day or every other day,” he explained. “There was also the aero lounge in Akerman, where most of us convened. We would talk about homework, discuss answers on exams, and play cards.”

In fact, a few of the classmates even became colleagues after graduation.

“Aeronautics was a good field to be in at the time,” explained Ceman, who graduated top of the class. “We had a hot skill set and companies were clamoring for us—oil companies, think tanks, every aerospace company in the nation; many of which don’t exist anymore.”

“They flew us in for job interviews,” Ceman said. "Most of us had multiple job offers. It was such an eye-opening and enriching experience.”

About 30 percent of the graduates went to Boeing, he said. Ceman himself had 40 interviews and chose TRW Inc., where he spent a four-decade career. The now-defunct company built a number of spacecrafts, including NASA’s lunar orbitor Pioneer 1 and space probe Pioneer 10, and several space-based observatories or telescopes.

Olson also found himself with a company that worked with NASA.

In his first job with Martin Marietta Corp. in a suburb of Denver, Olson was part of the Titan missile program and then the Viking project (to put a soft lander on Mars during the nation’s bicentennial on July 4, 1976).

A nod to the first lunar footsteps and the U

The date for this 1969 class reunion was no coincidence.

“Everyone of us in aeronautical engineering was interested in the space program,” said Ashley, who did most of the planning for their two-day event—and even designed a commemorative mug to celebrate the two-in-one golden occasion.”

“When George and I were talking one day about two years ago, the dates just clicked,” he added. “The moon landing was one of the outstanding achievements of the 20th century.”

Both Ashley and Ceman pitched in the last two reunions. It was Olson who did the heavy lifting then.

“Two years ago, Gary said our 50th was coming up and asked if he could count on my help if he took the lead this time,” recalled Olson, who had organized the group’s very first reunion in 1979 and again in 2009.

Olson said yes. He wanted the gatherings to keep going and was glad someone else was willing to pick up the reins.

“I spent a lot of time with these people in and out of the classroom, and I want to continue the dialogue with them,” he said. “A reunion lets this happen. It’s just the right thing to do.”

Of the 65 aeronautical engineering graduates who marched in cap and gown through Memorial Stadium on June 13, 1969, only five didn’t hail from Minnesota.

Ceman was one of them. He came straight to the University from a high school in Washington state. This time, 50 years later, he flew to Minnesota from California.

“I’m back to see old friends,” Ceman replied, when asked his reason for returning.

“I respect where we all came from,” he continued.

“We had an excellent curriculum and preparation. The skills we learned at the University of Minnesota allowed us to stand up in the world. We’ve all had successful careers and most of us have had interesting accomplishments as well. And we always have good stories to share!”

In May, the College of Science and Engineering welcomed the Class of 1969 into the Golden Medallion Society. See these photos in the CSE Flickr album.

See images from this aerospace engineering alumni reunion in the College of Science and Engineering's Flickr album.