Holly McKissick: What's in your backpack?

“A toothbrush robot,” said Holly McKissick, a senior majoring in biomed­ical engineering. As president of the University of Minnesota's chapter of the Society of Women Engi­neers (SWE), she uses the easy-to-make robots (they consist of a toothbrush head, a battery, a vibrating cell-phone motor, and some eyeball stickers) as a fun engagement tool at outreach events.

At two events—one in the fall and another in the spring—SWE brings 100 to 150 high-school girls and their families to campus for a day of panel discussions, tours, activities (such as making toothbrush robots), and one-on-one time with female College of Science and Engineering students. McKissick knows firsthand how influen­tial these events can be; attending an on-campus SWE event when she was in high school was a big factor in her decision to come to the U.

“When I saw the community that SWE had built, I knew I’d have a support network, which was really important to me as a woman going into engineering,” McKissick said. 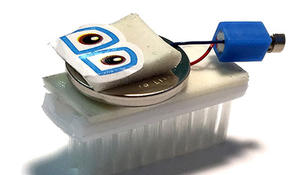 Vibrating robot made from a toothbrush head, a battery, and a cell-phone motor (Photo by Pamela Belding)

Scholarship support was another important draw. With three brothers—two of them in college at the same time she is—McKissick said paying for college was a big concern for her and her parents. Thanks to several jobs she’s had during her time at the U, combined with student support such as the Frank Louk Schol­arship, she’ll graduate with no debt. “Scholarships have meant a lot more security and a lot more freedom,” she said. “I don’t feel as burdened.”

One of the highlights of her college experience has been doing undergrad­uate research. As a sophomore, she helped create digital 3-D recreations of a guinea pig’s brain in a lab that was exploring hearing problems such as tinnitus. Last summer, she analyzed data from a study called the TeleFamilies Project, which investigated how care for children with multiple medical needs is affected when families have telephone or videoconference access to an ad­vanced practice nurse.

McKissick says the cross-disciplinary nature of the research was inspiring to her. “If we’re going to solve some of these grand challenges in health care, it’s going to take more than just one specialty,” she said.