Nearly all corn-based ethanol produced in the United States is anhydrous, meaning that it contains less than a half percent water by volume. However, the distillation and drying processes required to remove the water from ethanol consume a great deal of energy.

Researchers from the Department of Mechanical Engineering are investigating a more efficient alternative: the use of hydrous, or wet, ethanol, which contains more water. Not only does hydrous ethanol require less energy to produce, but it can also result in reduced emissions of nitrogen oxides (NOx) and soot when used in diesel engines.

Assistant Professor Will Northrop and Professor David Kittelson are conducting two projects examining the use of hydrous ethanol in diesel engines. The first uses an engine system that would need to be implemented by original equipment manufacturers, and the second is exploring the potential for aftermarket systems.

The research has received funding from the Agricultural Utilization Research Institute (AURI), Minnesota Corn Growers Association, and the Initiative for Renewable Energy and the Environment, a former program of the U of M's Institute on the Environment. 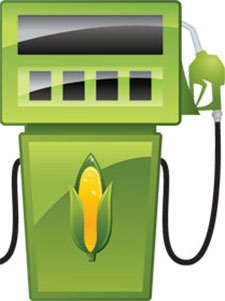 In the first project, the researchers are using hydrous ethanol in a dual-fuel diesel engine that uses a combustion method called reactivity-controlled compression ignition (RCCI). In an engine using RCCI, the ethanol and diesel fuel are mixed directly in the combustion chamber. Unlike other approaches for using ethanol in diesel engines, RCCI allows ethanol to be the primary fuel source for the engine, thereby reducing harmful exhaust emissions.

In fact, the researchers have been able to use 150-proof ethanol—75 percent ethanol and 25 percent water—to provide up to 85 percent of the fuel energy in a diesel engine using RCCI. Using the 150-proof hydrous ethanol saves about 20 percent of the life-cycle greenhouse gas emissions compared to traditional ethanol.

“It so happens that making the hydrous ethanol is less energy intensive, and it is really great for this type of engine combustion. We’re able to show comparable overall engine thermal efficiency to diesel-only energy and reduce emissions to a low level,” Northrop says. Specifically, the researchers were able to keep emissions below the Tier 4 Environmental Protection Agency standards for off-road diesel engines.

“This is a big deal because most people need aftertreatments to get rid of particulate matter and NOx emissions, and we don’t need to use them. This is a huge selling point because companies are interested in eliminating aftertreatments in off-highway applications like tractors and locomotives,” Northrop says.

In the second project, the researchers are examining aftermarket systems that could be used to retrofit a range of older diesel engines to use hydrous ethanol. As part of the project, the researchers are partnering with CleanFlex Power Systems, a Nebraska-based company that has developed a dual-fuel aftermarket system allowing diesel engines to use hydrous ethanol.

Northrop and Kittelson plan to install a CleanFlex retrofit kit on an engine in their lab. “We will use our expertise in particulate emissions management to do a deep dive into the composition of these emissions from dual-fuel hydrous-diesel operation,” Northrop says.

“We hope to learn what the makeup is of the emissions that are remaining after an engine is retrofitted with a CleanFlex system,” says Ron Preston, CleanFlex president. “With the research being done at the University of Minnesota, we hope to be able to make some alterations that will get a reduction of particulate matter at 85 percent or greater. That will make this a very important solution for emissions reduction in diesel engines.”

Reprinted with permission from the October 2013 issue of CTS Catalyst, a publication of the University of Minnesota's Center for Transportation Studies.