Letting nature do its work

Like many Minnesotans, Maria Camila Merino Franco spent a good portion of her summer out on the water. Unlike most, she spent that time taking drone pictures, measuring native wetland plant growth, and building goose-deterrent fencing.

Merino Franco, a senior in the Department of Bioproducts and Biosystems Engineering (BBE), earned an Undergraduate Research Opportunities Program (UROP) grant that allowed her to work with BBE research professor Joe Magner on a novel project aimed at improving water quality in Minnesota ponds and lakes. From May to November, she managed several specially designed “floating wetland” islands at two different sites.

Excess nutrients like phosphorus and nitrogen are a problem across the Land of 10,000 Lakes. Resulting mostly from fertilizer and agricultural runoff, they fuel algae blooms that endanger freshwater fish, form attachment sites for pollutants, turn the water an unsightly green, and even jeopardize human health.

“The roots grow below the matrix, so they’re just floating in the water,” Merino Franco explained.

They gather algae and microbes and “absorb a lot of phosphorus and nitrogen,” thereby helping clean the water around them. The microbes hosted by the roots also provide a food source for aquatic wildlife.

“It’s such a simple idea—letting nature do its work,” said Merino Franco.

And it embodies the kind of work she hopes to do as a BBE graduate. Merino Franco, whose family moved to Minnesota from Colombia eight years ago, has always been concerned about ecology—and specifically, water.

“My grandmother didn’t have running water,” said the first-generation college student, who received the University’s Thomas W. and Lynn B. Rusch Scholarship. “And I remember when I was in first grade, our school mascot was a drop of water.”

An obstacle course for geese

The recycled, BPA-free plastic structures are produced by a company called Floating Island International, whose subsidiary, Midwest Floating Island, is based in St. Paul. So far, the matrices seem to survive Minnesota winters just fine. Each island is anchored more or less in place by cement barrels.

“That way it can move around a little, but not too much,” Merino Franco said.

What’s planted on them varies depending on what grows easily and naturally in a specific region.

“Because you’re using native plants, these islands look different in different areas,” she said. “You want them to come back every year, and you want them to support pollinators and provide habitat.” 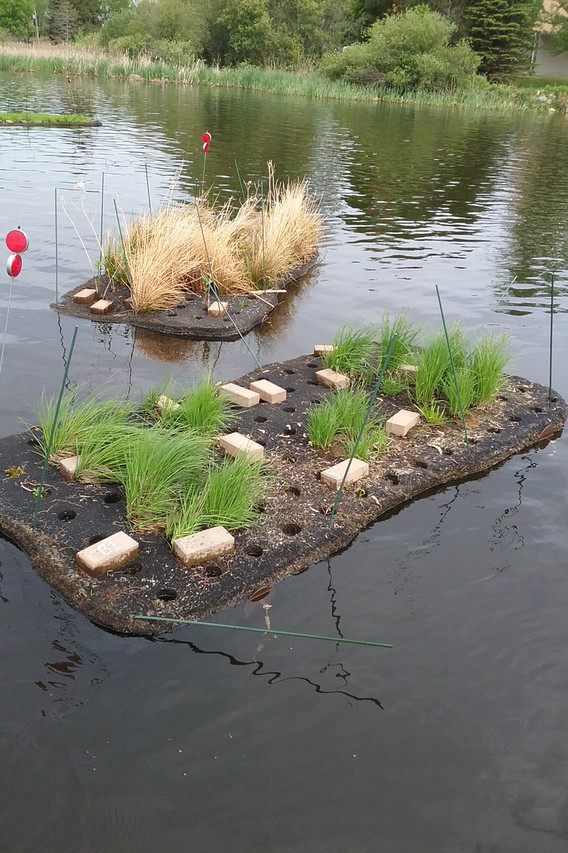 The islands Merino Franco managed and monitored are in a stormwater retention pond in Vadnais Heights, a Twin Cities suburb, as well as Fleming Lake in northern Minnesota’s Aitkin County. They’re planted with bulrush, ironweed, wool grass, swamp milkweed, and common rush. Last year, a problem emerged that she was able to help solve when her UROP tenure began.

“The geese pulled out a lot of our plants on Fleming Lake—about 80 percent of them! And the [human] residents around the lake weren’t happy about that,” Merino Franco said.

The first concern was replanting. To spare the expense and logistics of hauling all new plants up to Aitkin, the team decided to try starting from seeds the second time around. The next issue was preventing the geese from wreaking havoc again.

The team tried planting bamboo poles at intervals around the islands, but “they just used them as an obstacle course,” Merino Franco said.

What did work was a simple fence, made of posts and one strategically placed wire, around the island perimeter.

“They trip over it,” she laughed.

Partnering with the neighbors

She even came to work closely with one landowner, a retired engineer who offered the use of his pontoon boat, and she earned the approval of another local who initially opposed the islands.

“We invited him to come out on the boat with us, and after we [showed him] and talked to him more about it, he was very interested,” Merino Franco said—even offering to “adopt” an island next year.

Merino Franco loved the experience of combining research, working with a professor, collaborating with a private enterprise, and interacting with local residents to build support for the project.

“You can offer a solution,” she said, “but if the people who live there don’t want to implement it, it’s not going anywhere.”

Read about Ph.D. student Michael Fulton's experience with Minnebot and the IRV Lab in "Tinkering in different buoyancies."

Read about graduate student Mrugank Bhatt work with cavitation in “More to bubbles than you think.”

If you’d like to support student research opportunities, visit our CSE giving page.