Making tracks toward innovation in the stormwater runoff treatment train

Cleaning stormwater runoff—the stormwater treatment train—includes a number of phases starting with the removal of larger debris (including with the SAFL Baffle), down to smaller particles and pollutants that are picked up and carried along in the flow following a storm event. This treatment train has long focused on removing suspended solids and particles from stormwater runoff. As much as 40 to 50 percent of the pollutants in stormwater, however, are actually dissolved compounds including nutrients such as phosphorus and nitrogen as well as metals such as cadmium, zinc, copper, chromium and nickel. These pollutants are not settled nor filtered out in many of the existing stormwater runoff treatment systems that are found across the region, state and nation.

In 2005, Andrew Erickson and Professors Peter Weiss and John Gulliver identified techniques to remove the dissolved compound phosphate from stormwater, with excellent results. They found that the use of elemental iron was the most effective in terms of effectiveness and cost. The iron would form iron oxides (rust), which acts as an adsorbent for phosphate. Between the storms, the iron would rust, and be ready to adsorb phosphate during the next storm. Only recently, however, has awareness grown regarding the significance of dissolved pollutants. Increased regulation limiting levels of phosphorus in runoff has again pulled this SAFL research to the foreground.

In 2009, SAFL research on an iron-enhanced sand filtration system was utilized by Barr Engineering to design an enhanced filtration system in Maplewood. Following the success of those initial installations, a number of similar systems have been installed across the metropolitan region, allowing SAFL researchers an opportunity to monitor, evaluate and enhance these stormwater treatment systems. 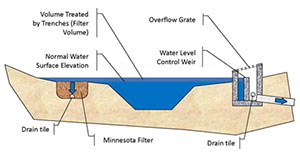 The iron-enhanced sand filtration system, named the Minnesota Filter, has also been installed along the perimeter of 10 wet detention basins in Prior Lake. During a rainfall or storm event, the water level in the detention basin rises, allowing water to flow into the filtration media where the phosphates attach to the oxidized iron in the sand/iron mixture and the water is filtered as it runs towards the drain tile at the base of the trench.

Phosphorus and Nitrogen—The so-called "limiting nutrients” phosphorus and nitrogen lead to immediate and excessive growth of algae and cyanobacteria in surface waters such as lakes, ponds and other fresh water features. This reduces oxygen in the water, undermines the appearance of surface water for recreational use, can lead to death of fish species and can produce an unpleasant odor and taste. Sources of phosphorus and nitrogen contributing to runoff pollution include lawn fertilizers, leaf litter, grass clippings, soils, detergents, etc.

Toxic Metals—Automobiles are a source of metals that are toxic to many species in the biota. Copper is contained in brake pads, zinc comes from tire wear, and cadmium and chromium are in the auto bodies. Runoff from buildings and industrial sites are also a source of metals. Industrial processes can input metals into the air, which leads to metal atmospheric deposition. Thus, toxic metals are a concern for the water that washes off of roads, buildings, and parking lots, much of it dissolved. Any atmospheric deposition of metals will also be in dissolved form.

The iron-enhanced sand filtration system, named the Minnesota Filter, has also been installed along the perimeter of 10 wet detention basins in Prior Lake. During a rainfall or storm event, the water level in the detention basin rises, allowing water to flow into the filtration media where the phosphates attach to the oxidized iron in the sand/iron mixture and the water is filtered as it runs towards the drain tile at the base of the trench. 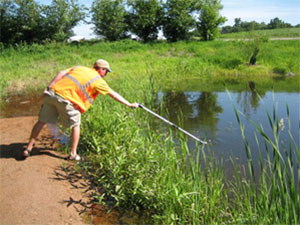 In addition to ongoing research on the iron-enhanced filtration systems to capture phosphates in urban runoff, Thibodeaux, Weiss and Gulliver are conducting related studies on a modified filtration system that can be installed vertically in swales, or ditches, along roads to capture phosphates as runoff flows through. This would enable ditches to include multiple levels of the runoff treatment train, as plants and soil capture suspended solids, followed by these vertical media through which the runoff would flow, filtering phosphates in the process. Initial studies will involve laboratory experiments in SAFL flume facilities to develop the design and makeup of filtration systems that function with the same efficiency and effectiveness as the retention pond filter trench systems.

Erickson, Arnold and Gulliver are also exploring the appropriate treatment train to remove other dissolved compounds such as metals and nitrogen, without requiring anaerobic digestion by bacteria.