From planet Earth to outer space

“This is heavy,” said Professor Emeritus Calvin Alexander of the University of Minnesota Department of Earth Sciences as he unwrapped a giant, brown hunk of iron in his Tate Hall office.

And the rock was heavy—though perhaps more intriguingly, it was from space.

The chunk Alexander held was part of a four-billion-year-old, 65-pound meteorite that a South Dakota farmer dug up in 1961. It now resides in the University of Minnesota professor’s office, after Alexander and his wife drove it further west to be cut and polished by a meteorite dealer in Montana. Alongside the rock sat a bag full of shiny, silver shavings that fell off the meteorite while it was being cut.

Today, those rare bits of alien life are encased in glass vials and labeled as “stardust” at the Bell Museum’s Curiosity Shop—waiting for new owners.

Alexander was one of six College of Science and Engineering faculty and staff who played a role in the new Bell Museum, which opens to the public July 13-15. 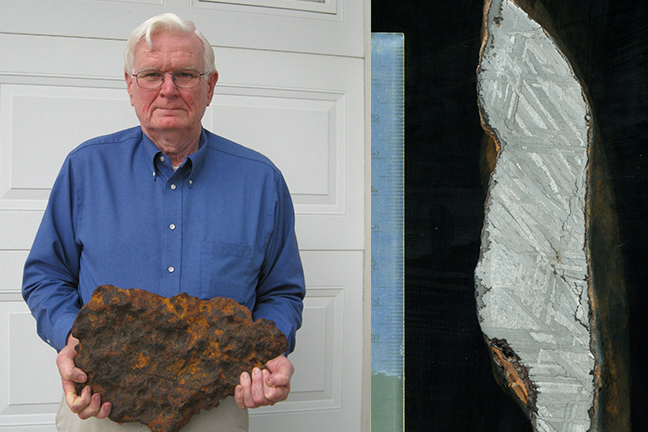 (Left) Professor Emeritus Calvin Alexander holds a meteorite that’s 4 billion years old. It is part the University of Minnesota's world-class meteorite collection with more than 100 specimens.
(Right) A close-up of the crystalline interior after the rock was cut and polished.

Doing their part for natural history

The Bell Museum also tapped Department of Earth Sciences professors Donna Whitney and David Fox, and staff member Paul Morin. In addition, School of Physics and Astronomy professors Lawrence Rudnick and Chick Woodward, who are part of the Minnesota Institute for Astrophysics, shared their expertise.

Morin, who directs the University’s Polar Geospatial Center, designed a shaded-relief map of the Upper Midwest that shows terrain elevation changes. Morin typically makes similar maps of the Arctic and Antarctic in cooperation with NASA and the National Geospatial Intelligence Agency—though this one for the Bell Museum, he said, was just documenting “a slightly warmer place.”

Whitney, Fox, and Woodward served as scientific consultants. They reviewed or approved material for several exhibits within two of the museum’s four permanent galleries, Life in the Universe and Tree of Life. For example, Woodward examined outlines developed by the Bell Museum staff for the Finding New Planets exhibit and, in some cases, provided rewrites and proper references.

“This was a long process of back-and-forth over several months,” Woodward said.

Also taking a fair amount of time was Woodward’s work for a “discovery station.” These touchscreen kiosks, which appear in different galleries on the second floor, are a chance for visitors to virtually meet a University of Minnesota researcher and learn how to participate in active citizen science projects.

“The discovery station is a rather extensive interactive exhibit that involved a choreographed film shoot and back-end development of imagery,” he explained.

“I’ve not yet seen my final interactive exhibit,” Woodward  said. “But when the Bell Museum opens, I'm told everyone can go over and ‘push-my-buttons.’”

Planets and stars, and mighty telescopes, oh my!

Rudnick’s contributions are more wide-ranging and span years. The Distinguished Teaching Professor, who has taught astrophysics at the University of Minnesota for nearly 40 years, was a regular visitor and collaborator at the Bell Museum’s original Minneapolis location. He partnered with museum staff on everything from designing exhibits to planning guest lectures and setting up a traveling planetarium.

For the new Bell Museum, Rudnick took on an advisory role. He served on the “client team” that worked diligently on initial direction and concepts for content in the permanent galleries. This included determining what stories each exhibit space would tell, especially in the Life in the Universe gallery, and what lessons they would impart to visitors.

“I was heavily involved on the front end,” Rudnick said. “I worked with exhibit designers and helped to craft a story into a journey that made sense and unfolded cohesively.”

He also worked with the Bell Museum’s planetarium team on all things related to astro science, including the layout of the outdoor observation area and the positioning of the roof deck telescopes. 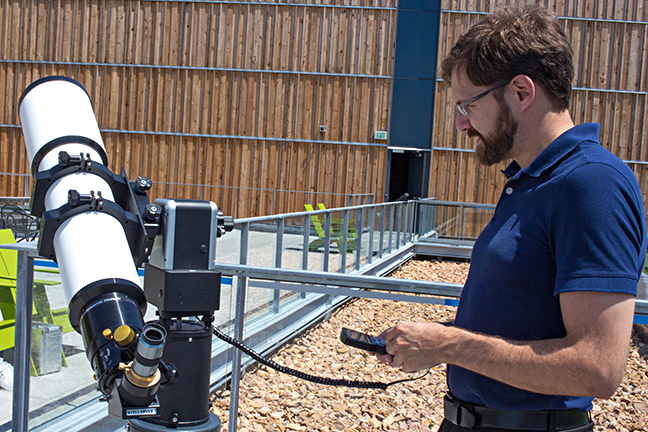 Going forward, Rudnick foresees a “tighter integration” between the new museum and the Minnesota Institute for Astrophysics, located in Tate Hall, to produce programming for the planetarium, set direction for public outreach activities, and train future astrophysicists or astronomers.

“Currently, we do a lot of visits to schools, and our teaching assistants and grad students also get to work with Boy Scouts and Girl Scouts, giving presentations and doing hands-on demonstrations on astronomy topics,” he noted.

“But we want to work with the Bell Museum to look at other opportunities for our students to learn,” Rudnick said.

Speaking of College of Science and Engineering students, junior Geoffrey Dybicz is among the University of Minnesota staff who have played a role in the new Bell Museum.

Dybicz, who is majoring in industrial and systems engineering, works as a 3D printing coordinator at the Earl E. Bakken Medical Devices Center. Over a period of about two months, he and colleague Grace Aysta used handheld scanners on the wall-mounted animal sculptures that once adorned the old museum exterior and produced more than 100 3D prints of the living organisms—bears and storks, among them. The prints were given to Bell Museum donors as a thank you for their financial or material contributions.

The Bell Museum's three-day opening weekend includes an after-hours party on Friday, July 13 with planetarium previews and telescope observing. On Saturday, July 14, members of the Solar Vehicle Project will display their car, named EOS II, and answer questions about the car. On Sunday, July 15, Professor Lawrence Rudnick will staff a table in the astronomy exhibit area. He will be joined by other College of Engineering and Science faculty.

The Bell Museum is located on the corner of Cleveland and Larpenteur Avenues in St. Paul.

For event details or to buy admission tickets, visit the Bell Museum’s website.