In February 2011, Seemore the sea turtle came to the SEA LIFE Minnesota Aquarium at the Mall of America from a turtle hospital in Florida. Two years earlier, a collision with a boat had damaged her shell and trapped air beneath it, giving her what is affectionately called “bubble butt syndrome.”

This condition forces Seemore to swim with her rear end sticking up and keeps her from diving normally. Her care team at SEA LIFE attaches weights to the shell to correct her buoyancy, but must continually replace them when she sheds scutes (plates on the shell).

Because replacing the weights causes Seemore stress, she needs a better method for readjusting her buoyancy. Since last summer, a team of mostly undergraduate University of Minnesota students has been designing one for her.

After a June 2017 CT scan at the U’s Veterinary Hospital, the students, led by mechanical engineering graduate student Davis Fay, took the data and started designing what they call an "exoshell" for the 100-pound turtle. Using equipment from the U’s Institute for Engineering in Medicine 3D Printing Core, the team printed a 3D prototype exoshell.

For students involved in the partnership with SEA LIFE, working on this project has provided a unique opportunity that they wouldn't get anywhere else.

Other students found the project to be an excellent way to apply their skills.

“I’d had some experience with 3D printing in high school and college,” says team member Tom Skahen, an aerospace engineering major. “I could use the software, run the printers, and explore the options we could use.”

In January 2018, Fay and Barrette performed a fitting of the prototype on Seemore at SEA LIFE. The team hopes to have a permanent exoshell this summer. Then Seemore will be able to swim and dive more normally, and, says Fay, “if she gets hung up, she’ll be able to break it off.” 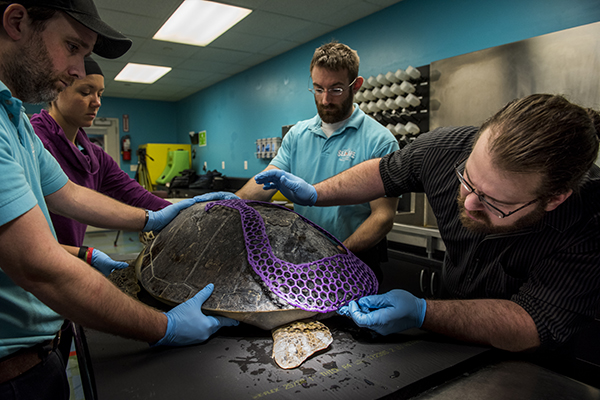 Seemore is a green sea turtle, the second largest species of sea turtle. SEA LIFE provides permanent homes for damaged and disabled creatures like Seemore that have been rescued and need a home. SEA LIFE Aquarium got her from the Sea Turtle Hospital in Marathon Key Florida after they deemed her un-releasable.

If you'd like to support University of Minnesota College of Science and Engineering student projects, visit our CSE Giving website.