The way the samples melt and change reveals how the earth’s vast interior works. Clues emerge about how volcanoes and earthquakes behave today, how they worked in the past, and how an atmosphere forms and changes. Not just on Earth, but on other planets, too.

The blue multi-anvil that puts the squeeze on the samples in Kolthoff Hall weighs 10,000 pounds. Its two piston cylinders weigh a ton each.

Marc Hirschmann, professor of earth sciences, points out the anvil’s components: hydraulic oil to produce pressure, electricity to generate heat, water to cool and prevent breaking, and a virtual nervous system of wires that monitor the parts and provide readouts. At the moment, the temperature reads 1,500 degree Celsius.

At the center of the action is a steel capsule the size of a thimble.

“It’s like a Russian egg,” says Hirschmann, picking up a similar capsule from the bench nearby. The little steel cylinder encloses a tungsten carbide cylinder, which in turn contains a nest of cylinders made of graphite, then magnesium oxide, platinum, another of graphite — and at the core, a few milligrams of a mineral or synthetic mineral.

In a lab over in Kolthoff Hall, graduate student Fred Davis places a sample recovered from high pressure and temperature under an electron microscope. The hard chip appears as an irregular rectangle with spots of garnet that reveal formation of the mineral garnet. Garnet is a signature of high pressure, and an indicator of the conditions of magma formation.

Hirschmann and his research team are part of the community of researchers around the world figuring out ways to test theories about the formation of planets and the very old days on Earth. Because of his ability to design ingenious experiments that promise to reveal more about planetary origins and continuing transformations, Hirschmann was named a Distinguished McKnight University Professor this year.

A scholar's scholar
He's an igneous petrologist of the experimental and theoretical sort, with particular strength in thermodynamics. While Hirschmann works with tiny samples in his experiments, they are chosen carefully to test theories about forces working on enormous scales.

“Marc has the uncanny ability to see the bigger picture,” says department head David Kohlstadt, who shares lab space with his colleague. Colleagues describe him as a scholar’s scholar, creative and generous, and a global leader.

Science was not a surprising choice for Hirschmann.

“At 10, I would have said I wanted to be a scientist,” he says. Through his teens, he took a detour into history and political science. Then, as a college freshman in New York, he discovered backpacking and mountaineering. That led to one geology class, then another. Before long he transferred to Berkeley and spent the next decade up and down the West Coast, including a period working for the U.S. Geological Survey in Oregon and a postdoc at Caltech.

Today Hirschmann’s career has evolved from doing the experiments himself, which he loves, to leading large groups and collaborating with colleagues across the globe. His models have culminated in universally used software and influence other disciplines. He still teaches large lectures to undergraduates, but he also guides and mentors a team that includes five graduate students, a postdoc, undergraduates for shorter periods, and an associate researcher.

His research focus has shifted in the past few years, too. When Hirschmann arrived at the University of Minnesota in 1997, all of his work — about volcanism, ocean plate tectonics, and the evolution of the earth’s structure — was supported by the National Science Foundation. Now it’s mostly about other planets and early portions of Earth’s history as a terrestrial planet, in the same category as Mars, Venus, Mercury and our moon. Most of the support comes from NASA.

"I'm at an interesting point in my research life," he says. "It's exciting." 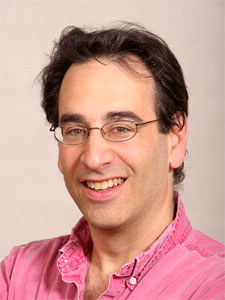 Well-oiled machines
One of Hirschmann's project focuses on the early Earth atmosphere. Planets’ atmospheres originate from volcanic activity; on Earth, that meant water and carbon dioxide for 4 billion years. His team’s research is studying how the chemistry of the mantle affects the atmosphere and whether the earliest atmosphere was similar to or different from today’s.

Since the 1950s, when now-famous experiments at the University of Chicago showed that a spark applied to a mix of methane, hydrogen and ammonia produced amino acids, the building blocks of life as we know it, many people have believed life can emerge more easily in a methane-rich environment than one rich in water and CO2 like those found in modern volcanic gases and Earth’s present atmosphere. Experiments in Hirschmann’s lab aim to test whether Earth’s earliest volcanic gases were indeed chiefly made of these more primitive or were more similar to those found spewing from modern volcanoes.

Another project focuses on the puzzle of an atmosphere on Mars.

“We know Mars has evolved over time — we see evidence that there was liquid water stable on its surface, whereas now it’s a frozen desert. Many think that the earlier warm climate on Mars was owing to a thick CO2-rich atmosphere that derived from volcanic gases. However, based on the samples we have from Mars (chiefly from meteorites), we know that Martian volcanoes erupted in an oxygen-pour environment, and our experimental studies show that magmas formed in such an environment must be starved of CO2,” he explains.

“We don’t dispute the fact that there was a ‘greenhouse,’ but on Mars it wasn’t principally carbon, at least not volcanically produced. We have other candidates — like methane and sulfur dioxide.”

It’s also not surprising that the machines required for Hirschmann’s experiments have changed, and the diversity of the machines has increased. Outside the doorway of the lab with the 10-year-old multi-anvil, a new anvil — also blue and just as heavy — had been delivered and required assembly in order to join the project and speed results. The McKnight funding will allow Hirschmann to stabilize the expert staff that his labs now require.

“I wish I were smart enough and inspired enough to do my work with pen and paper, but we need data, and we need machines to get it,” he says with a smile. “We are always having to do things we don’t know how to do yet.”

Small worlds
With four new grants and the opportunity of the McKnight award, Hirschmann spent the summer getting his labs ready to function smoothly while he’s in Australia for the coming year, pursuing new research avenues and collaborations.

“It’s like a beehive,” he observes. His office in Pillsbury Hall is also chaotic. Managing complexity, he says, has become one of the biggest challenges in his job.

He’ll travel with his award-winning wife, Donna Whitney, pursuing her own line of research on the earth’s crust, and their teenage daughter. The tricky part was agreeing on a place that promised to be fruitful for all of them.

The chance to spend time with colleagues half a world away is valuable on many fronts. It also helps to dispel the notion of the lone researcher that individual awards can foster, an idea Hirschmann finds misleading.

“We’re part of a diverse group of scholars around the world contributing,” he says, “whether by observation or theoretical or experimental work.”

His McKnight award from the University of Minnesota will enrich them all.