On Aug. 21, 2017, professional and amateur astronomers alike will be watching the skies for the first total solar eclipse in North America since 1979. Now, with the help of university students, NASA is offering a unique and safe way to watch the celestial event on a first-ever livestream of the solar eclipse from near space.

University of Minnesota aerospace engineering and mechanics students in the High-Altitude Ballooning Team are part of a collaboration between NASA and 57 student ballooning teams across the nation who will launch high altitude balloon flights from about 25 locations across the total eclipse path from Oregon to South Carolina.

The trackers will send live video and images from near space to the NASA website. While NASA has taken photos and video of prior eclipses, never before has the wide-scale streaming of live video been attempted of an eclipse from near space.

Ben Geadelmann and Austin Langford, two undergraduate juniors majoring in aerospace engineering, are Minnesota’s project leads. James Flaten, an aerospace engineering and mechanics associate professor and associate director of NASA's Minnesota Space Grant Consortium, brought the project to the students and is helping to coordinate their work. The result of their work will benefit anyone interested in watching the eclipse.

“In one location, you only get to see the eclipse for about a minute and a half and then it’s gone,” Geadelmann explained.

“With the livestream, you can see the eclipse as it goes across the whole country and you get to watch it from a unique perspective,” Geadelmann added.

About the eclipse tracking system

The University of Minnesota team’s ballooning system is made up of three payloads: a satellite modem for long-range communication, a camera for taking still images, and a camera for shooting live video. The cameras on the balloon payload will take both pictures and video and transmit them through the radio modem to an antenna tracker on the ground where the team members will be. The video will then be streamed to the NASA website where viewers will be able to watch the eclipse in real time.

Similar mechanisms will be in place from other teams launching balloons across the United States to gather data for the full four hours of the solar eclipse.

A culmination of more than 17 months of work

Geadelmann, Langford, and the rest of the University of Minnesota team, which totals to about 10 active students, have been working on this project since January 2016. The original system design was proposed by the team from Montana State University, and since then, Minnesota students have been working alongside several other leadership teams to improve the design and distribute those improvements to other teams across the nation.

Last summer, Geadelmann and Langford attended a build conference in Montana at which all teams congregated in one location to assemble their identical flight payloads and ground stations.

“It was interesting,” Langford said of the conference. “It was a lot of fun working with more than 50 teams of people all trying to accomplish the same thing with different levels of experience.”

“Some people had never even flown a balloon before this,” Geadelmann said. “And then there are teams like ours that have flown more than 100 times.”

As veterans in the ballooning field, the Minnesota students have made significant improvements to the original payload design, one being the refinement of radio signal speed between the ground and the atmospheric balloon. While the original radio function sent down information to the ground every 30 seconds, Minnesota’s team has cut this process down to transmitting every three seconds. Currently, the team is working on distributing this improvement to all other teams throughout the United States.

Eclipse ballooning teams are planning to initiate a nationwide dry run on June 21, 2017 to try out their ballooning capabilities and technological systems. Langford explained that even after the test run, teams will still be working hard to improve consistency and functioning of their balloon systems up to the date of the eclipse.

On the day of the eclipse, the Minnesota team will launch their high-altitude balloon from Grand Island, Neb. The eclipse will touch land in Oregon about 11:15 a.m. Central Time (9:15 a.m. Pacific Time), and the national livestream will begin documenting the celestial event as it travels across the United States.

For more information about the NASA livestream of the 2017 total solar eclipse, visit the NASA website.

To learn more about the Eclipse Ballooning Project at the University of Minnesota, visit the project page on the AEM website. 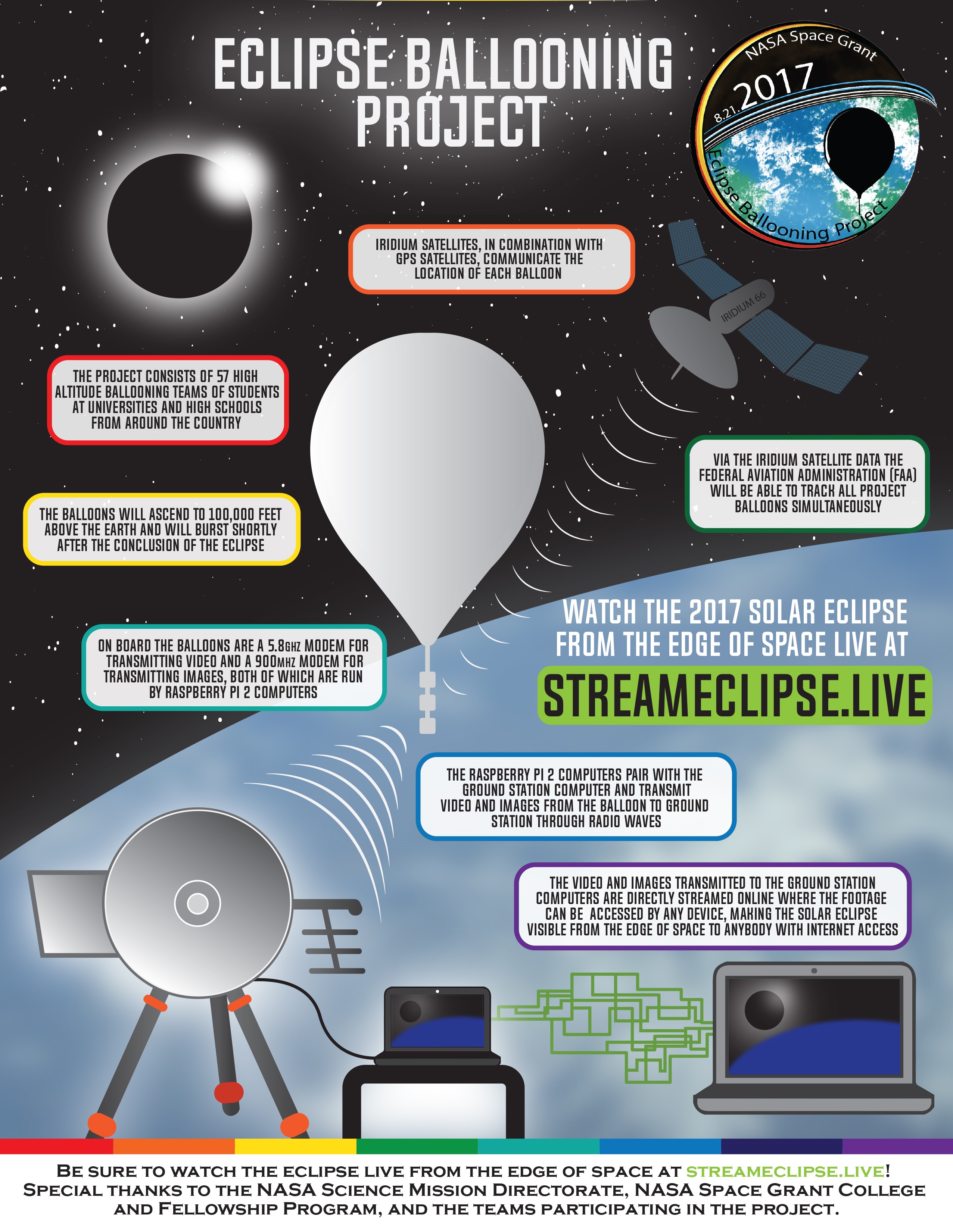 If you'd like to support University of Minnesota College of Science and Engineering students, visit our CSE Giving website.