Tony Nelson is a heavyweight wrestler who can bench press 320 pounds.

His schedule demands some heavy lifting too. A two-time NCAA champion and Olympic hopeful, the CSE senior also shoulders the rigorous workload of a mechanical engineering major.

Nelson grew up in Cambridge, Minn., and won the high school state championship title in his senior year. Upon arriving at the University of Minnesota, he devoted himself to a program with a storied tradition. Under head wrestling coach J.P. Robinson, Minnesota has won three NCAA team championships, 14 individual titles, and produced 61 All-Americans over the last three decades.

“I sacrifice spending time with friends,” he said. “For me, it’s being disciplined.”

“The program has the ability to transform guys into the top level of collegiate athletes,” said Nelson. “If you buy into what the coaches want you to do, you have a chance to become good. It’s worked for a lot of people.” 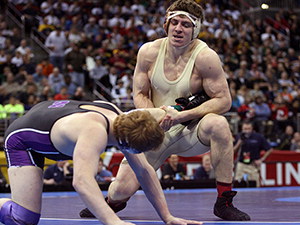 It certainly worked for Nelson. He is a three-time All-American and won NCAA heavyweight titles in 2012 and 2013 and has a chance to become Minnesota’s first-ever three-time national champion wrestler.

That requires a lot of work. Nelson devotes up to 20 hours per week to athletics, including practice in the wrestling room plus supplemental training such as lifting weights and running. In the last year, he bulked up from 245 to 270 pounds—mostly lean muscle.

Such discipline has rubbed off on his studies. In a typical week, Nelson spends up to 30 hours on academics. During the season, every weekend brings dual meets or tournaments. Often this requires travel and missing a day or two of classes. He has learned to get his work done ahead of time.

“I sacrifice spending time with friends,” he said. “For me, it’s being disciplined.”

Nelson will graduate this spring but won’t put his degree to use right away. First, he plans to pursue a more pressing opportunity—the 2016 Summer Olympics.

He plans to devote himself to full-time training in hopes of making the U.S. Olympic team in freestyle wrestling and likely will split time between the Twin Cities and the Olympic Training Center in Colorado Springs, Colo.

“Wrestling is a sport you wouldn’t do if you didn’t love it or enjoy it,” said Nelson. “It shows you how to work hard. Mechanical engineering is a tough major, but I’ve learned from wrestling how to put that extra time in and learned to figure out how things work and how to do things. That has helped me succeed."