Trap nasty carbon dioxide, save the world, become a 'Master of Filtering'

Your mission: Save the world from carbon dioxide gas (CO2). Your task: Build nano-materials that will successfully trap those nasty carbon dioxide molecules while allowing life-giving molecules through to save your world. Lose: Your world dies. Succeed: You become a Master of Filtering.

The challenge: Create a game that will teach young people about nano-technology, engage them in working on a real-world problem and possibly, just possibly, spark their creativity to build structures that will help solve a troublesome real-world environmental issue.

For more than a year, researchers in the Nanoporous Materials Genome Center (NMGC), based in the College of Science and Engineering’s Department of Chemistry, along with researchers in the Department of Computer Science and Engineering worked to create a game, Master of FilteringTM, that lets players design and test new Metal Organic Frameworks (MOFs) within an interactive game center.

After watching her beloved nephew play computer games for hours on end, University of Minnesota Chemistry Professor Laura Gagliardi had an idea.

"I thought that it would be nice if kids could do something more educational while having fun. And at the same time, they could help us make progress in science while playing,” Professor Gagliardi said.

“Working on this project has been very fun,” said Guy. “Trying to understand and capture the underlying chemistry forces you to invent new styles of game play that are different from anything else out there right now."

"I think the work has a lot of potential to attract gamers who will be excited about the fact that playing the game can contribute directly to science,” said Professor Guy. 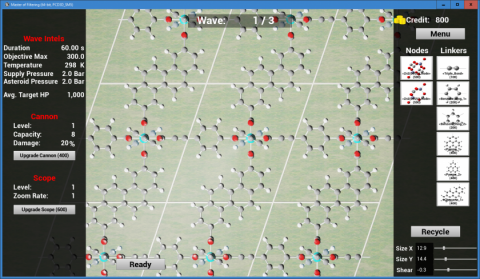 In the building phase of Master of Filtering, gamers design Metal-Organic Frameworks that block or adsorb as much carbon dioxide as possible.

Metal-organic frameworks are a new class of nano-materials that are useful for a variety of safety, filtering, and manufacturing tasks. They are porous crystalline materials made by inorganic and organic units linked together by strong bonds. Because they have high levels of thermal and chemical stability, MOFs have important applications such as gas storage, catalysis of organic reactions, activation of small molecules, gas adsorption and separation (air purification), biomedical imaging, and proton, electron and ion conduction.

In phase one, the building phase of the game, each player is tasked with designing MOFs that block or adsorb as much harmful gas—carbon dioxide (CO2)—as possible, while allowing harmless or even helpful gases—nitrogen (N2)—to pass through as freely as possible. Each player is given a canvas of 3 by 3 unit cells, and can use the game’s building block library and available budget to buy different building blocks to create structures that will form an important defense matrix for the action phase of the game. Once the player feels that the defense matrix is ready, preliminary chemical calculations are performed to prepare some of the parameters for the action phase of the game. 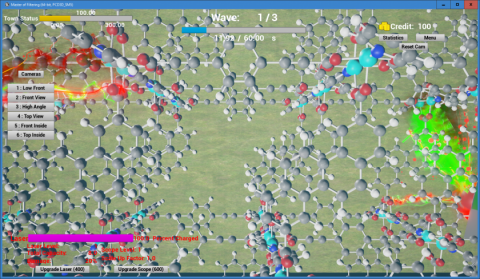 During the action phase of the game, a wave of asteroids (carbon dioxide molecules) and supplies (nitrogen) molecules drops from the sky and hits the defense matrix.

During the action phase of the game, a wave of asteroids (CO2 molecules) and supplies (N2 molecules) drops from the sky and hits the defense matrix. While the objects are in the matrix, a real-time simulation of the underlying chemical structures is used to determine whether the supplies and asteroids are destroyed or pass through the defense matrix. The asteroids and supplies that pass through land on the player’s world unless destroyed by the player’s-controlled laser cannon. Each asteroid (CO2 molecule) that lands decreases the player’s health and each successful supply drop (N2 molecule) increases it. The player must remain healthy and save his or her world. The higher the player’s score, the better the chemical properties and filtering aspect of the created MOF. If successful, the player moves on to the next wave.

One of the NMGC’s important concentrations of research is discovering and exploring MOFs that can be used to capture and separate harmful CO2 molecules from less environmentally harmful gas molecules such as N2. "From a real-world perspective, it is possible, that players may create new materials with enhanced filtering properties that could be useful in separating CO2 from N2," said Gagliardi.

The game’s creators are continuing to refine the game to make it more user friendly and simpler for non experts, to make it available on different platforms, and to extend the building blocks with which the users can build MOFs. You can download the Master of Filtering game in Windows 64 format (other operating system builds will be coming). Watch a how-to play video on YouTube, narrated by Professor Cramer.

DOI: http://dx.doi.org/10.1145/2994258.2994267. This research was support by the Nanoporous Materials Genome Center, funded by the U.S. Department of Energy, Office of Basic Energy Sciences, Division of Chemical Sciences, Geosciences and Biosciences