The vast amount of information computers can now retrieve would be impossible without a place to store it all. For that storage, thank Tu Chen, a pioneer in the evolution of thin film magnetic media.

“Storage is so important,” said Chen, who spent a career finding ways to cram ever more data into smaller spaces on a hard drive disk.

“Do you know where that data comes from when you search on Google? It comes from a Google server farm, and it’s free for you because we were able to make such cheap storage,” Chen said.

Chen was born in 1935 in Taiwan when the island was still occupied by the Japanese. He graduated from college with a degree in metallurgy but was unable to find a job in his field because he was not a member of the Chinese Nationalist Party.

“We were secondary citizens,” he said.

Ambition and lots of luck

With few prospects, Chen followed the advice of a visiting Fulbright scholar and applied to graduate programs in the United States, including the University of California, Berkeley, and the University of Minnesota.

When he arrived in California by plane in 1961, he was disappointed in the army-barrack aesthetic of Berkeley’s lab. He bought a Greyhound bus ticket to Minneapolis, where he showed up at another Taiwanese student’s apartment with $27 in his pocket.

“A sequence of some very good luck and fortunate circumstances had led me to the University of Minnesota,” Chen wrote in a memoir. “It felt like this was my destiny.”

The University of Minnesota, at the time, was one of a handful of institutions in the United States with materials science research programs dedicated to electronic device applications.

For the next six years, Chen worked with professor John M. Sivertsen, a leading researcher in magnetic materials. Sivertsen arranged for Chen to get a job while still working on his master’s degree so that in 1963, Chen could bring his wife from Taiwan along with their two-year-old son whom he had never seen.

His expertise in magnetic materials couldn’t have come at a better time.

The road to a multi-million dollar business

In 1971, Chen joined Xerox’s famed Palo Alto Research Center (PARC) in Palo Alto, Calif. to work on creating what was then a revolutionary idea—a personal computer priced for the average office worker. Chen’s task was to develop better versions of the magnetic disk that records and stores data.

When Xerox later abandoned its computer project, Chen left with his research to found Komag in 1983 across the bay in Milpitas, Calif.

“There were 20 companies trying to make disks for disk drive companies but nothing worked,” Chen said. “And if the drive companies don’t have a disk that works, they can’t sell a computer. So, everyone was desperate for a high-density, reliable disk.”

Komag was the first to deliver. 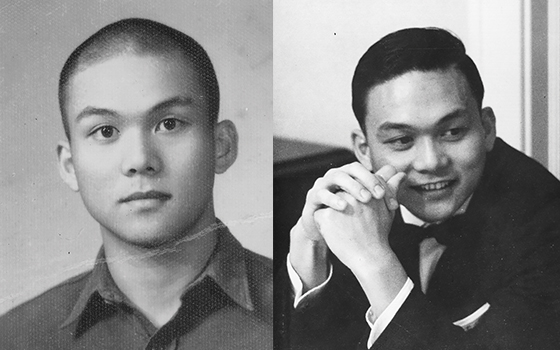 Tu Chen, over the years

The company manufactured an “Oreo cookie” of highly engineered layers: an aluminum disk was coated with a plated film of nickel-phosphorus, covered by a film of magnetic cobalt-platinum alloy applied in a vacuum by a custom sputtering machine shipped from Japan, topped with a diamond-hard coating of carbon and finally sprayed with a secret lubricant that Chen first tested using his wife’s perfume atomizer.

It was the first durable alternative to iron oxide disks and it paved the way for subsequent leaps in technology.

Giving back to his community

The same restless ambition that led Chen to leave Taiwan and work long hours in the lab drove him to build Komag into a multi-million dollar business with overseas plants. Chen used some of his earnings to establish the Tu and Pi-Fang Chen Scholarship for the University of Minnesota’s College of Science and Engineering.