U of M astronomers release new research about nearby galaxies

University of Minnesota professor Evan Skillman and graduate student Dan Weisz are part of an international group of astronomers who recently released new findings regarding their research of nearby galaxies.

The new data will give astronomers unprecedented insight into star formation and how it makes each galaxy unique. It also will provide new information about how other galaxies are similar to or different from our Milky Way Galaxy. A better understanding of nearby galaxies may provide clues to the possibility of life elsewhere in the universe.

Early results of the research show a rich diversity of nearby galaxies--some made up of entirely ancient stars, while others have been forming stars nearly continuously during their whole lives. There are even a few examples of galaxies that have only started forming stars in the last two to three billion years, which is considered the recent past by astronomers. This delayed star formation is interesting because most galaxies are thought to have formed a large fraction of their stars in the first two to three billion years of a 13.6 billion-year-old universe.

“The main step forward with this research is that astronomers looked at all the nearby galaxies, not just ones that appeared different or unique,” Skillman said. “This gives us a large, unbiased statistical sample for the very first time.”

Skillman and Weisz said they were invited to be a part of the research team because of the University of Minnesota’s expertise in studying star formation in smaller “dwarf” galaxies over the past decade.

A typical galaxy contains billions of stars but looks “smooth” when viewed through a telescope, because the stars are blurred together. In contrast, the galaxies in the new research are close enough to Earth that the sharp “eyes” of Hubble’s Advanced Camera for Surveys and Wide Field Planetary Camera 2 can resolve individual stars in the galaxies. By measuring the brightness and colors of these stars, scientists can derive the local history of star formation within a galaxy and can tease out subtle features in a galaxy’s shape. 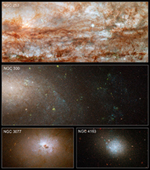 The amount of data the researchers received on a weekly basis during the five months was almost overwhelming for the researchers. “It was like Christmas every week,” Skillman said. He and Weisz said the data will provide useful information for researchers for more than a decade.

About the images on this page:
These images taken with NASA's Hubble Space Telescope are close-up views of galaxies from a large survey of nearby galaxies.