Honors student Brian Carrick will receive $7,500 for his senior year

MINNEAPOLIS/ST. PAUL (04/01/2021) — College of Science and Engineering student Brian Carrick is one of two juniors at the University of Minnesota Twin Cities who have been recognized as Goldwater Scholars by the Barry Goldwater Scholarship and Excellence in Education Foundation. Carrick and College of Biological Sciences student Hannah Bodmer will receive scholarships worth up to $7,500 for their senior years.

This prestigious, competitive scholarship is awarded annually to outstanding sophomores and juniors who intend to pursue research-oriented careers in mathematics, the natural sciences, and engineering. This year, 410 students were recognized as Goldwater Scholars out of 1,256 nominees from 438 colleges and universities nationwide.

Brian Carrick is a junior majoring in chemistry and chemical engineering from Red Wing, Minn. He is a recipient of the CSE Alumni Scholarship, and the Jerry and Leona Hillestad Scholarship. Last summer, he had a Heisig/Gleysteen fellowship from the Department of Chemistry and an Undergraduate Research Opportunities award but no access to a lab. The Covid-19 pandemic had closed the lab of Regents Professor Timothy Lodge, where Carrick had been investigating the dispersal of polymers in ionic liquids. One of his projects, an approximation of the binodal curve for polybenzyl methacrylate in an ionic liquid, produced results challenging an accepted solution theory and won a top prize for student research when presented at the national conference of the American Institute of Chemical Engineers.  But without access to a lab, he couldn’t move on to the next stage of his planned work, so he reimagined the work, speculating about the implications and possibilities of his research and hypothesizing a new technique for triggering phase separation of polymer solutions.

In addition to his research, Carrick is a tutor for calculus and organic chemistry on campus, has volunteered as a STEM camp leader with Mid-Continent Oceanographic Institute, and is a leader of the campus chapters of AICHE and the Tau Beta Pi honor society. He plans to complete a Ph.D. in chemical engineering and lead a polymer research group to produce functionalized polymeric materials from renewable feedstocks and explore eco-friendly, catalytic decomposition of plastics. 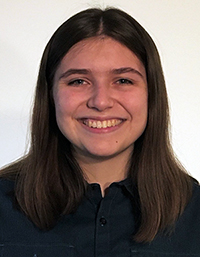 Hannah Bodmer is a junior from Chanhassen, Minn., majoring in biology and entomology in the College of Biological Sciences. She has been interested in insects for as long as she can remember. In high school she had the opportunity to participate in a study of leaf-cutter ants in Costa Rica. For two years she has crisscrossed the state, collecting corn rootworm beetles from farmers’ fields in western counties and aquatic flies from streams in the southeast. In the summers, Bodmer has worked in entomology professor Kenneth Ostlie’s lab investigating the development of pesticide resistance in corn rootworm. During the winters, she has been studying winter-active aquatic flies with Professor Leonard Ferrington to assess the impact of temperature change on longevity and behavior. After graduation, she plans to complete a Ph.D. in entomology and teach and conduct research on environmental factors that drive evolutionary adaptation in insects.

University of Minnesota Twin Cities students who are interested in applying for the scholarship in the future may consult the Office of National and International Scholarships by visiting www.honors.umn.edu/scholarships or by contacting Timothy Jones at natschol@umn.edu.