Scientists need your help in first-ever census of Weddell seals

MINNEAPOLIS/ST. PAUL (04/13/2017) — Scientists are asking for the public’s help to look through thousands of satellite images of Antarctica in the first-ever, comprehensive count of Weddell seals. Documenting the seals’ population trends over time will help scientists better understand the effects of climate change and commercial fishing in the Antarctic.

Last summer, the researchers completed a successful pilot program with help from more than 5,000 volunteers who counted seals from satellite images of sea ice in the Ross Sea. The team is now ready to expand the project to the entire continent.

“Right now, everything we know about Weddell seals is limited to an area representing about one percent of the coastline around Antarctica,” said Michelle LaRue, a research ecologist in the University of Minnesota’s Department of Earth Sciences and lead researcher on the project. “Now we need help from the public to search the remaining 99 percent so we can better understand where seals live and why.”

Weddell seals are important to the Southern Ocean ecosystem and have been studied since the early 1960s. However, no one has been able to do a comprehensive count of the seals due to the harsh Antarctic weather and remote locations in which the seals live. Now, high-resolution satellite images provide a solution—counting seals on satellite images—but there are too many images for scientists to handle alone.

“There’s really no other way to do a count of Weddell seals like this,” LaRue said. “Even though our team includes seasoned researchers and know how to count seals on the images, it would take years for our small team to search all the images. These types of projects also expand education on important wildlife species. We have engagement from classrooms nationwide in our research.”

Weddell seals are one of Antarctica’s most iconic species. In addition to being undeniably charismatic, they are the southern-most mammal in the world, can live up to 30 years, and are perfectly adapted to living in some of the harshest conditions on the planet. They are seasonal occupants of the coastal sea ice that surrounds Antarctica. By counting seals on satellite imagery, scientists hope to learn more about climate change and how fishing in Antarctic may be affecting the number of seals and the entire ecosystem over time.

This research is funded by the National Science Foundation and is a joint effort of the University of Minnesota, University of Colorado at Boulder, H.T. Harvey & Associates Ecological Consultants, Point Blue Conservation Science, Tomnod, and DigitalGlobe.

Below is an image with descriptions of what you can see in this image. There is an iceberg, from which a crack extends. Each of the red circles is a Weddell seal and appears somewhat teardrop in shape. 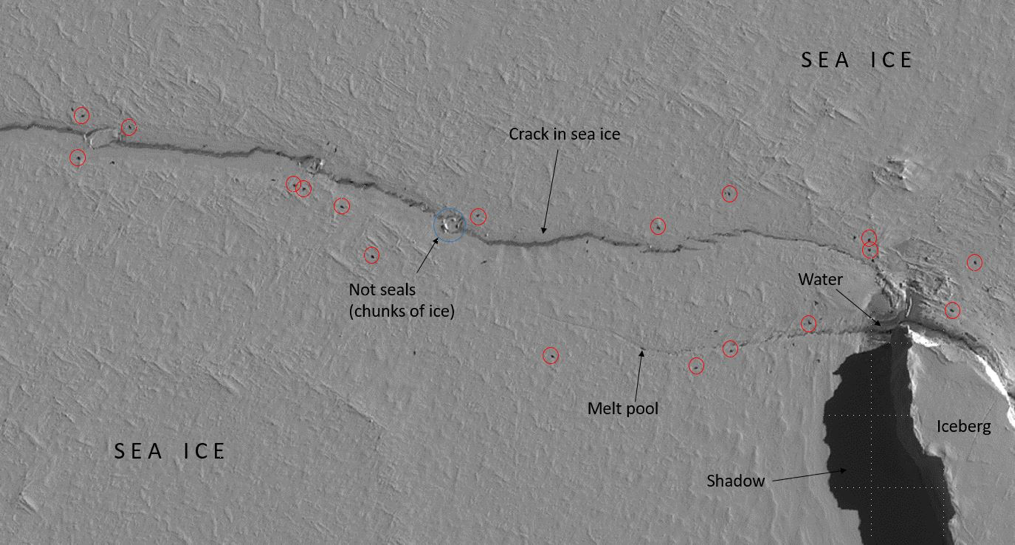 Here is an example of an image with some seals on it. All the seals we can see in this picture are circled in red. Don’t be fooled by shadows—check (by zooming) if the dark spot is really a shadow from a chunk of ice or a small melt pool. 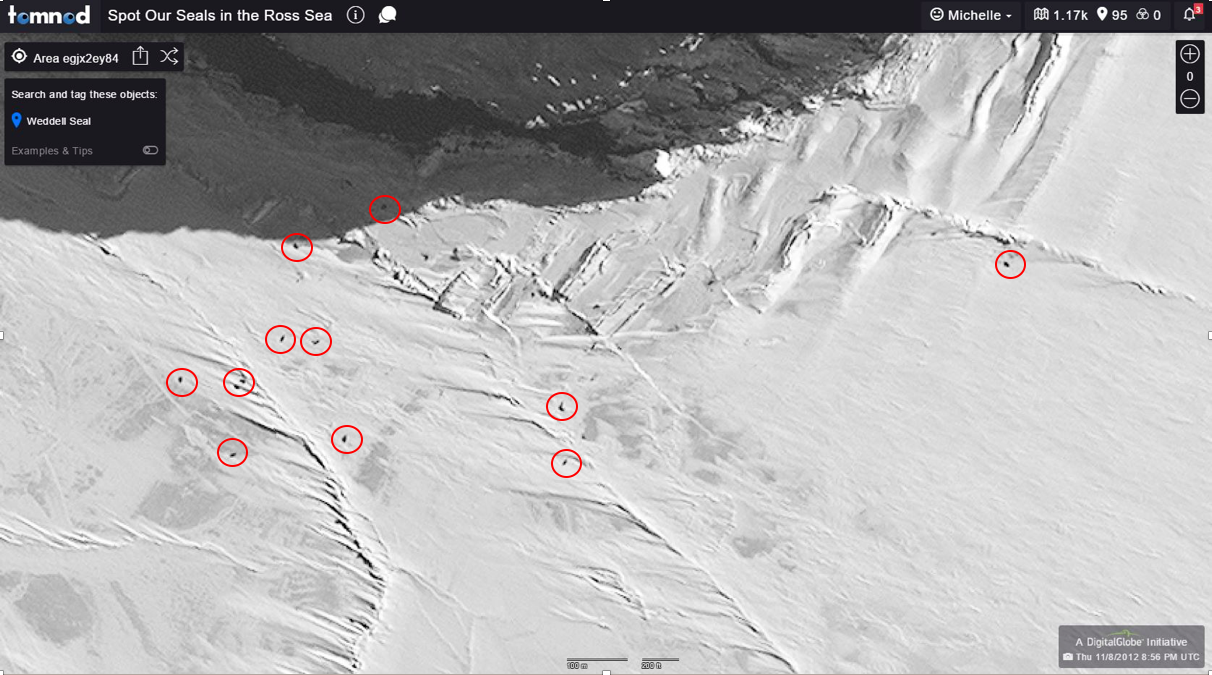