Minnesota Starwatch by Deane Morrison, designed to inform the broadest possible community of the appearance of the nightly sky and current activities in newspapers, continues to be published in several newspapers throughout the state. 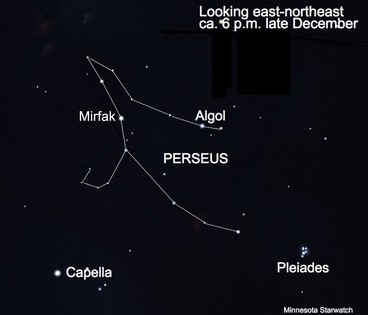 December opens with Jupiter dropping into the sunset. On the 3rd, Saturn, Venus and Jupiter form a diagonal line with Jupiter in the sun’s afterglow and brilliant Venus almost exactly midway between the other two planets.

As Jupiter sinks, Venus climbs. In the second week of the month, Venus passes much dimmer Saturn, coming closest on the 10th and 11th. On the 28th, Venus comes out above a thin young crescent moon; together, they form a celestial semicolon.

In the east, the knot of bright winter stars assembles for viewing by about 10:30 p.m., earlier as the month goes on. If you have lots of nights with clear, dark skies, try locating the constellation Perseus (a star chart will really help). Find the brilliant star Capella at the top of the winter assembly and look to the right to find the Pleiades star cluster. Then look at the space immediately above and between them. You'll see scraggly Perseus and its brightest star, Mirfak. Slightly lower and to the right of Mirfak is Algol, the constellation's second-brightest star, whose name comes from the Arabic for “the demon.”

The “Demon Star’s” brightness varies noticeably every two days, 20 hours and 49 minutes. That’s because Algol is a triple star, and when a dimmer one passes in front of the brightest one, we see a dip in brightness. Algol was regarded as the winking eye of Medusa, the snake-haired monster slain by the mythical Greek hero Perseus.

In the predawn sky, Mars is dim but climbing steadily in the southeast. To find it, try looking an hour before sunrise on the 23rd, when a thin crescent moon appears below and left of the red planet. Near the end of the month, the stars of Scorpius approach Mars as they crawl up from the horizon. Among them is the heart of the scorpion: reddish Antares, whose name means “rival of Mars.” Antares will pass Mars in January. The star is currently brighter than Mars, but in October 2020, when Earth laps Mars in the orbital race, the red planet will far outshine its rival.

December’s full moon rises the evening of the 11th. Ten days later, at 10:19 p.m. on the 21st, the winter solstice arrives. At that moment the sun reaches a point directly over the Tropic of Capricorn, marking the official start to winter in the Northern Hemisphere. 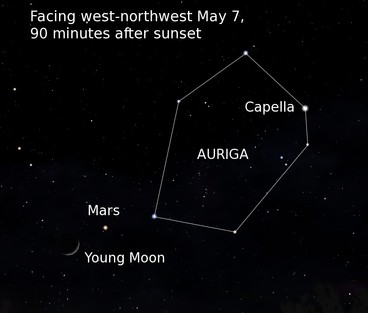 In May we start to lose our old friend Mars, which is dropping out of the evening sky after being a fixture there since last summer. The red planet has great staying power, thanks to being the speediest of the outer planets. But Earth is speedier yet, and now we’re starting to round the sun, leaving Mars on the other side of it.

Mars gets a last hurrah, though, on the 7th. If you look as soon as the sky gets dark, you’ll see a young crescent moon low in the west, just to the lower left of Mars. These two rocky bodies, plus two stars, form a nearly straight line that night. Below and east of the moon is Betelgeuse, in Orion, and high above and west of Mars is bright, multicolored Capella, in Auriga, the charioteer.

Taking center stage in the south now is Virgo, a large but dim constellation with only one bright star: Spica. If you’re unsure which star it is, a waxing moon will be above it on the 15th. Slightly below and west of the star is Corvus, the crow, a small constellation resembling a rather bent-out-of-shape square. High to the upper left of Spica, brilliant Arcturus shines from its kite-shaped constellation, Bootes the herdsman.

Jupiter, a morning planet since December, starts rising before midnight this month. It travels the sky between Antares, the red heart of Scorpius, to the west, and the Teapot of Sagittarius to the southeast. Just east of the Teapot, Saturn brings up the rear. Above Saturn hangs the delicate, curved Teaspoon of stars.

The Eta Aquarid meteor shower is predicted to peak in the predawn hours of the 5th and/or 6th. This shower may deliver as many as 40 meteors per hour if skies are quite dark. Look to the southeast, toward the constellation Aquarius, to see remnants of Comet Halley burning up in Earth’s atmosphere. May’s full moon arrives on the 18th at 4:11 p.m.; look for it to rise just before sunset. 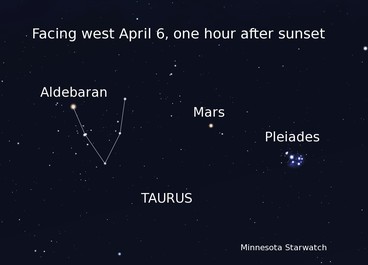 The first day of April dawns with a crescent moon closing in on Venus just above the east-southeastern horizon. Bathed in the sun’s foreglow, both have a rendezvous with the sun—the moon as it glides below and in front of the sun, Venus as it circles behind it—on their way to the evening sky. At new moon on April 5, the moon begins its next climb out of the sunset. But Venus won’t pass behind the sun until August, and only reappears as an evening star in late fall.

While you’re out, be sure to look low in the south-southeast for the Teapot of Sagittarius, flanked on the west by bright Jupiter and on the east by Saturn. If you need any more help identifying the planets, a bright waning moon sweeps close to Jupiter on the 23rd and Saturn on the 25th.

On the 19th, early risers may see April’s full moon hovering over the western horizon. Fullness comes at 6:12 a.m.; moonset follows less than an hour later all over the state, with earliest setting times in the more eastern locations.

During April the spring constellation Leo, the lion, prances high in the south during prime evening viewing hours. Its brightest star, Regulus, shines from the bottom of the Sickle of stars outlining the lion’s head. The Sickle resembles a backward question mark, with Regulus at the point. East of the Sickle, a triangle of stars represents Leo’s hindquarters and tail. At the tip is Denebola, whose name comes from the Arabic for “tail of the lion.”

East of Denebola shine two bright stars: brilliant Arcturus, in Bootes, the herdsman, at about the same altitude as Denebola; and Spica, in Virgo, nearer the horizon. Although Denebola is a bit dim, these three stars form an almost perfect equilateral triangle and have been called the Spring Triangle. That name has also been applied to the less regular triangle formed by Arcturus, Spica and Regulus. In the west, the winter stars are streaming past Mars. In the first week of April, watch the Pleiades star cluster go by Mars on the right. On the left, the V-shaped Hyades star cluster, marking the face of Taurus, the bull, soon follows suit. Compare the colors of the red planet and Aldebaran, the bright and yellowish eye of the bull, as the two bodies pass. 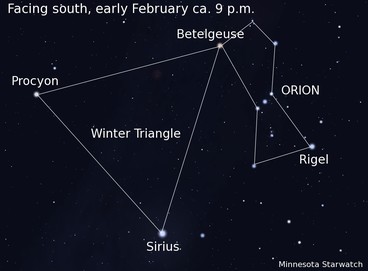 February opens with Venus and Jupiter lighting up the southeastern predawn sky. As the month goes by, Venus drops toward the rising sun while Jupiter, now higher than Venus, rapidly pulls away westward. Saturn, following Jupiter, passes Venus between the 17th and 19th. On the 28th, Jupiter, a waning moon, Saturn and Venus form, in that order, a descending line to the horizon.

High above and west of the planets shines brilliant Arcturus, the jewel of Bootes, the herdsman. Look to the left of Arcturus for its rival Vega, the brightest of the Summer Triangle of stars.

In the evening sky, Mars, in the southwest, drifts slowly westward as the bright winter constellations close in on it. These constellations are now high in the south during the mid-evening hours—in prime viewing position. Lowest in the bunch is Canis Major, ornamented by Sirius, the night sky’s brightest star. Only 8.6 light-years away, Sirius owes most of its brilliance to its proximity.

Sirius is actually a star system; it includes a white dwarf star that has the same mass as the sun, but is the size of Earth, according to Robert Gehrz, professor of astrophysics at the University of Minnesota. “A piece of it the size of the last segment of your little finger would weigh two tons,” he notes. Someday, billions of years from now, our sun will become a white dwarf, too, as it burns the last of its nuclear fuel and casts off its outer layers, leaving only its hot core and a halo of gas and dust called a planetary nebula.

To the upper left of Sirius is another star with a white dwarf companion: Procyon, in Canis Minor. Procyon means “before the dog,” a reference to its habit of rising just before Sirius, the Dog Star. To the right of Procyon is Orion, with reddish Betelgeuse at his northeast shoulder. Together, Betelgeuse, Procyon and Sirius form the Winter Triangle of bright stars. February’s full moon arrives on the morning of the 19th, just seven hours after making its closest approach to Earth in this lunar cycle. Therefore, it qualifies as another large, luminous supermoon. However, it sets early that morning, before the moment of perfect fullness. To see it at its best, check your local time of moonset and look to the west about an hour in advance.

February may be one of the coldest months, but at least it gives us the distraction of Groundhog Day, an astronomically based holiday. The ancient Celts called it Imbolc, or lamb’s milk, one of four “cross-quarter days” falling midway between a solstice and an equinox. It was also considered the first day of spring. Our Groundhog Day comes from Celtic and other traditions that held that a clear day with shadows portended continued cold and winter, but clouds meant an early spring.