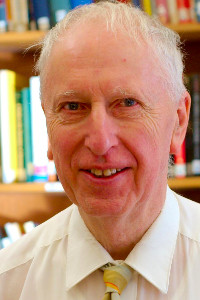 My work on the process of human hearing has now expanded to include a study of the time resolution of sounds presented to the human ear Previously one of my students, Steven Gardeen, graduated from the physics department, his thesis establishing that the human hearing (auditory cortex) is capable of discriminating small frequency shifts in equal loudness anharmonic partials (Fourier components). Also resulting from this research was the discovery that ‘mismatch’ sounds, i.e. a sound differing from the sound immediately preceding it, is processed at a different brain location in male and female subjects. Also determined was that the processing of this sound mismatch processor contains filters to determine whether the brain should be involved at the conscious level. It appears that a similar process is present for sounds with small (millisecond) time deviations.

Frank’s work was to determine if one could quantitatively measure permanent radiation damage to biological tissue due to ionizing radiation. (This is important in radiation cancer treatment, increasing the dose by 60% will change the cure rate from 5% to 95%). Currently dose is measured by mechanical equipment such as air filled ion chambers. Frank’s work was to measure permanent changes in the complex impedance of tissue (bovine muscle) as a function of radiation ‘dose’. He found that although the conductivity was relatively unchanged, the permittivity decreased as complex molecules were dissociated into smaller molecules. (With smaller dipole moments). Two papers have been written on Frank’s work, currently they are being released after being held from publication by the U patent office, which was assessing the patent prospects.

I am working on two projects associated with the selective local enhancement of cancer treatment dose by high -energy photon induced nuclear processes. My medical physics graduate student Pamela Soorian is studying selectively enhancing radiation dose in bones using the giant dipole resonance (at 16 Mev photon energy) of the bone calcium nuclei. The experimental verification is expected to be complete by the end of 2016. My physics student, Siddarth Karuka is assisting with research on local enhancement of radiation dose by the injection of high Z (gold) nanoparticles and irradiation by high-energy photons, while student Yao Meng is working on the possibility of using accelerator produce epithermal neutrons to interact with10boron. The enhancement in treatment dose by high-energy photons is caused by induced pair production producing additional beta particle recoils, whereas the boron neutron enhancement is due to nuclear dissociation after neutron capture by the 10boron. This photon work has already been proven in principle by my previous study using tissue equivalent plastic films, and has now reached the first animal tests. The neutron work extends the treatment of brain cancers (glioblastomas) already practiced in Japan using neutrons produced by a nuclear reactor to other cancerous growths.

Part of this work is currently funded by a University grant. We are currently discussing the possibility of government funding with the National Cancer Institute of the NIH for a more extended study .Their opinion was that an introductory animal study would greatly enhance the possibility of funding, and therefore we are at present carrying out small-scale work on rabbits.