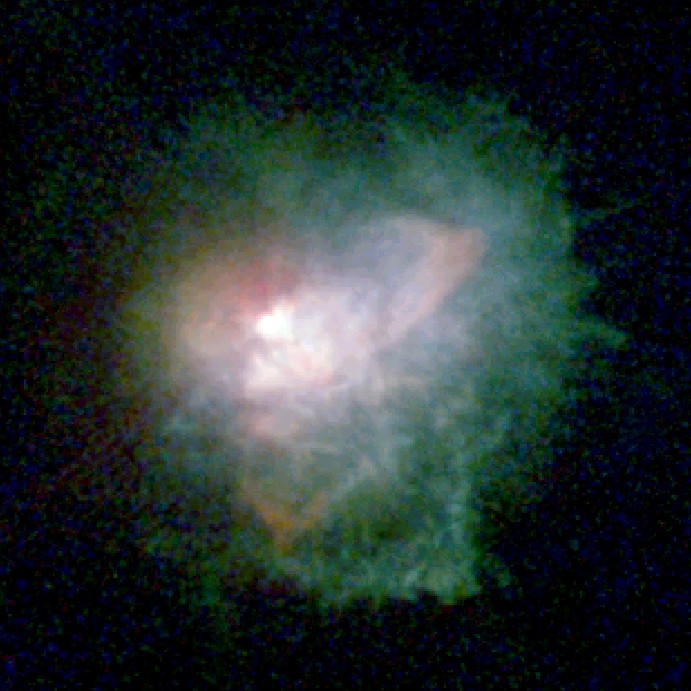 Professor Roberta Humphreys of the School of Physics and Astronomy led a study with the Hubble Space Telescope to explain the origin of numerous high mass-loss ejections from a very massive star.

Last year, astronomers were puzzled when Betelguese, the bright red supergiant star in the constellation Orion, dramatically faded, but then recovered. The dimming lasted for weeks. Now, astronomers have turned their sights toward a monster star called VY CMa

The red hypergiant VY Canis Majoris—which is far larger, more massive, and more violent than Betelgeuse—experiences much longer, dimmer periods that last for years. New findings from NASA’s Hubble Space Telescope suggest the same processes that occurred on Betelgeuse are happening in this hypergiant, but on a much grander scale.

“VY Canis Majoris is behaving a lot like Betelgeuse on steroids,” Humphreys says.

As with Betelgeuse, Hubble data suggest the answer for why this bigger star is dimming. For Betelgeuse, the dimming corresponded to a gaseous outflow that may have formed dust, which briefly obstructed some of Betelgeuse’s light from our view, creating the dimming effect.

“In VY Canis Majoris we see something similar, but on a much larger scale. Massive ejections or outflows of material correspond to active periods when the star dimmed by factors of 5  to 6, lasting years, probably due to dust that temporarily blocks light from the star,” said Humphreys.

The enormous red hypergiant is 300,000 times brighter than our Sun. If it replaced the Sun in our own solar system, the bloated monster would extend out for hundreds of millions of miles, between the orbits of Jupiter and Saturn.

“This star is absolutely amazing. It’s one of the largest stars that we know of—a very evolved, red supergiant. It has had multiple, giant eruptions or the past few hundred years,” explained Humphreys.

Giant arcs of plasma surround the star for thousands of Astronomical Units (A. U or the distance between the Sun and the Earth). These arcs look like the solar prominences from our own Sun, only on a much grander scale. Also, they’re not physically connected to the star, but rather, appear to have been thrown out and are moving away. Some of the other structures close to the star are still relatively compact, looking like little knots and nebulous features.

In previous Hubble work, Humphreys and her team were able to determine when these large structures were ejected from the star. They found dates ranging over the past several hundred years, some as recently as the past 100 to 200 years.

Now, in new work with Hubble, researchers resolved features much closer to the star that may be less than a century old. By using Hubble to determine the velocities and motions of the close-in knots of hot gas and other features, Humphreys and her team were able to date these eruptions more accurately. What they found was remarkable: Many of these knots link to multiple episodes in the 19th and 20th centuries when VY Canis Majoris faded to one-sixth its usual brightness.  Due to early visual and photographic observations, the historic light curve for VY CMa is available from 1800 to the present.

Unlike Betelgeuse, VY Canis Majoris is now too faint to be seen by the naked eye.  The star was once marginally naked-eye. It has dimmed due to dust, but can be seen with a small telescope or binoculars.

VY CMa has an average mass loss rate 100 times that of  Betelgeuse. But during the ejections its mass loss rate increases by a much as 10 times or more. The mass in some of the outflows or knots is more than twice the mass of Jupiter. “It’s amazing the star can do it,” Humphreys said. “The origin of these high mass-loss episodes in both VY Canis Majoris and Betelgeuse is probably caused by large-scale surface activity, large convective cells like on the Sun. But on VY Canis Majoris, the cells may be as large as the whole Sun or larger.”

“This phomenon is probably more common in red supergiants than astronomers previously thought and VY Canis Majoris is an extreme example,” Humphreys continued. “This may even be the main mechanism that’s driving the mass loss, which has always been a bit of a mystery for red supergiants.”

Though other red supergiants are comparably bright and eject a lot of dust, none of them is as complex as VY Canis Majoris. “So what’s special about it? VY Canis Majoris may be in a unique evolutionary state that separates it from the other stars. It’s probably this active over a very short period, maybe only a few thousand years. We’re not going to see many of those around,” said Humphreys.

“Maybe what makes VY Canis Majoris so special, so extreme, with this very complex ejecta, might be that it’s a second-stage red supergiant,” explained Humphreys. VY Canis Majoris may have already shed half of its mass. Rather than exploding as a supernova, it might simply collapse directly to a black hole.

The Hubble Space Telescope is a project of international cooperation between NASA and ESA (European Space Agency). NASA's Goddard Space Flight Center in Greenbelt, Maryland, manages the telescope. The Space Telescope Science Institute (STScI) in Baltimore, Maryland, conducts Hubble science operations. STScI is operated for NASA by the Association of Universities for Research in Astronomy, in Washington, D.C.