Astronomy is sometimes considered a subfield of physics. Astrophysics is a specialization in the field of astronomy.

Astronomers use the principles of physics and mathematics to learn about the fundamental nature of the universe, including the sun, moon, planets, stars, and galaxies. They also apply their knowledge to solve problems in navigation, space flight, and satellite communications, and to develop the instrumentation and techniques used to observe and collect astronomical data.

Almost all astronomers do research. Some are theoreticians, working on the laws governing the structure and evolution of astronomical objects. Others analyze large quantities of data gathered by observatories and satellites and write scientific papers or reports on their findings. Some astronomers operate large space-based or ground-based telescopes, usually as part of a team. A small number of astronomers work in museums housing planetariums. These astronomers develop and revise programs presented to the public and may direct planetarium operations.

Most jobs in basic research usually require a doctoral degree. It is common for astronomers to spend three to six years in postdoctoral positions before finding a steady position in a university department, national facility, or government lab. Those with master's degrees qualify for some jobs in applied research and development. Those with bachelor's degrees often qualify as research assistants or for other physics-related occupations, such as technicians.

*Salary and Career Outcomes gathered from the 2018-2019 CSE Graduation Survey. Post-graduation outcomes reflect the percentage of students who were employed full-time in their field or were enrolled in a graduate program at 6 months post-graduation.

**Cohort size too small to report data due to privacy regulations. 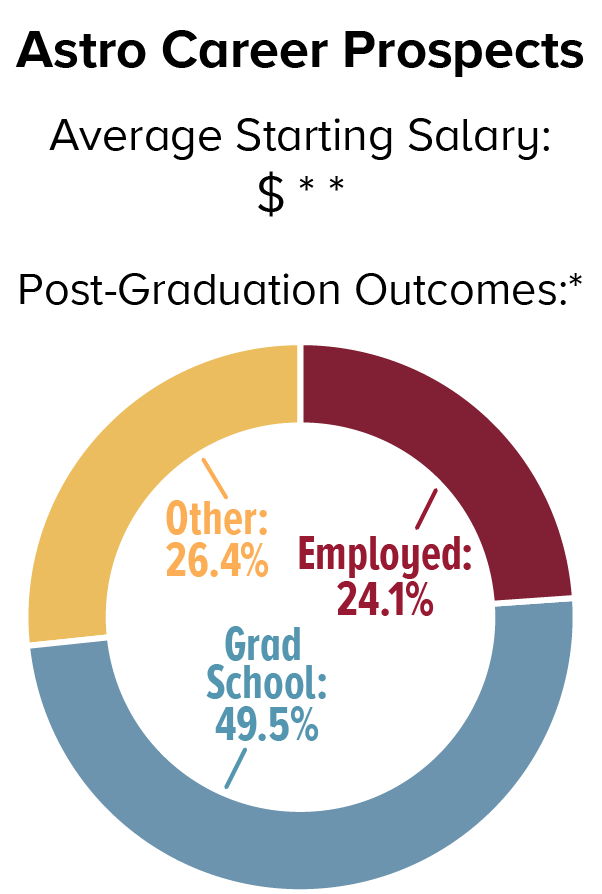 +
What can I do with a major in Astrophysics?

**Some of these positions may require an advanced degree.

Get a PDF version of this information.