Study probes the origins of galaxies in the early Universe

In the 1957 horror classic "The Blob," Steve McQueen battled a gooey monster from outer space that ate people to power itself and grow.

But that cosmic custard was a piker compared to the real thing.

Since its discovery in 2000, a blob of hydrogen gas 11.5 billion years old and 300,000 light-years across has puzzled astronomers seeking to explain how it managed to glow. Now, University of Minnesota astrophysicist Claudia Scarlata and two colleagues have found how the behemoth, known as LAB-1, does it: It shines by the light of galaxies embedded in it.

The discovery has implications for how galaxies formed and for the role played by hydrogen gas, the ultimate source material for stars, planets, and humans. The study also casts doubt on a different theory of how structures like it, known formally as Lyman-alpha nebulas (or blobs), got the energy to produce light. The work appears in the August 18 issue of the journal Nature.

By any measure, Lyman-alpha blobs are gigantic fossils.

"They are features of the early Universe, existing up to about six billion years after the Big Bang," says Scarlata. "Our Milky Way might have been part of one once."

Reflections in space and time

Lyman-alpha blobs are basically clouds of hydrogen gas containing galaxies. They formed when the Universe was only one to two billion years old, apparently in regions where the density of matter was high.

Their signature is Lyman-alpha radiation—light of a particular wavelength given off by hydrogen atoms as they lose energy. But for the last decade, astronomers couldn't identify the dynamo that generated this light.

The debate centered on whether the hydrogen that gave off the light was cold gas in the outer regions of the blob or hot gas in the central galaxies. 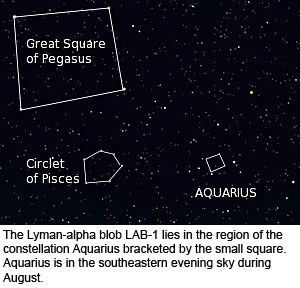 The answer turned on whether the light from the blobs was polarized.

Polarization, which can result from reflection, causes light waves to undulate in a particular plane as they travel toward the viewer. Therefore, if the second hypothesis were true, some of the light from faint, distant LAB-1 should have been polarized by reflecting off the hydrogen cloud. Also, according to theory, the polarized light should form a ring at a considerable distance outside the central galaxies. Conversely, a lack of polarization would support the first hypothesis.

So Scarlata and her colleagues—first author Matthew Hayes (University of Toulouse, France, and Observatory of Geneva, Switzerland) and Brian Siana (University of California, Riverside)—set out to win time on a telescope powerful enough to settle the matter.

"We had no clue whether the light from LAB-1 was polarized or not," says Scarlata. "But the European Southern Observatory [ESO] was brave enough to give us the observing time."

The team was brave, too, since a previous search by other researchers had detected no polarization of light from another Lyman-alpha blob, and observing time on the world's major telescopes doesn't come cheap.

Using ESO's Very Large Telescope, located in the high, bone-dry Atacama Desert of Chile, the team turned their sights on LAB-1 in October 2009. When they crunched the data, they saw a clear ring of polarization around—but not close to—the embedded galaxies. The finding strongly supports the idea that LAB-1 shines with light produced by the galaxies and reflected off the hydrogen gas cloud.

The finding has excited astrophysicists because a systematic study of Lyman-alpha blobs may help them map the gigantic gas clouds that are predicted to surround galaxies and to account for most of the ordinary matter in the Universe—far more than is found in cold gas and stars. Up till now, however, these extended clouds have been undetectable.