Although bike share systems are becoming more popular across the United States, little is known about how people make decisions when integrating these systems into their daily travel. For example, when more than one bike share station is located nearby, how do users choose where to begin their trip, and what factors affect their decision?

In a study funded by CTS, researchers from the U of M’s civil engineering department sought to answer this question by investigating how people use the Nice Ride bike share system in Minneapolis and St. Paul. Professor David Levinson and graduate student Jessica Schoner examined how Nice Ride affects accessibility to jobs and developed a model to predict station choice.

By comparing Nice Ride to walking, the study demonstrated that walking can successfully be used as a baseline to show how a bike share system improves job accessibility. The results also pinpointed when and where Nice Ride had the strongest accessibility advantage over walking.

“This type of information can be used by bike share system planners to identify where new stations could be built to maximize their impact on job accessibility,” Schoner says. “They could also look at accessibility to other destinations, like parks, grocery stores, or tourist attractions, depending on the goals of their system.”

Levinson and Schoner also developed a theoretical model for bike share station choice. The model considers users’ choice of a station based on their preference for the amount of time spent walking, deviation from the shortest path (the closest station may not be in the direct path of the person’s destination), and station amenities and neighborhood characteristics. 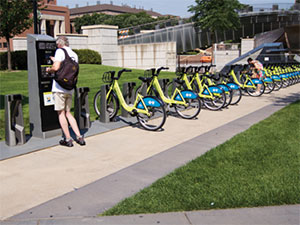 Findings show that people generally prefer to use stations that don’t require long detours to reach, but a station’s surroundings also play an important role. For example, stations located near a park and in neighborhoods with lower crime rates were more likely to be chosen as the starting point of a bike share trip. Results also show that commuters value shorter trips and tend to choose stations that minimize overall travel time, while users making non-work-related trips choose stations that allow them to spend more of their time biking, even if the total travel time is longer.

“For instance, even though spacing stations along a route would allow people to walk in the direction of their destination to pick up a bike, people’s strong preference to spend more time biking indicates that clustering stations near where they are starting and ending their trips might make more sense,” Schoner says.