Moving an object using only your thoughts? The scientific community called it impossible. But not University of Minnesota biomedical engineering professor Bin He, who only “highly doubted” it could work. That didn’t stop him from trying. “It’s just a fascinat­ing idea,” says He, a big thinker with an active imagination who directs the U’s Center for Neuroengineering and Institute for Engineering in Medicine. “That’s exactly the type of thing you need to test out.”

He spent the early part of his career mapping brain waves, figuring out how to decode them to direct movement, and designing a brain-computer interface to make it happen. Then he started testing whether his study subjects, usually students, could perform simple tasks, such as moving a cursor from one side of a computer screen to the other, using only brain waves picked up by an electroencephalogram (EEG) cap.

He believed that it should work, but he was always surprised when it did work.

So he kept going. While other brain-computer interface researchers throughout the world were having success using a chip implanted inside the brain, He kept working on a noninvasive way to accomplish the same thing. His team refined the technology until their study subjects could not only move a cursor on a screen but also fly a virtual reality helicopter— and then fly a real robotic helicopter in the real world.

“The research environment at the U of M is such a wonderful place that allows us to try things that may be impossible. We became the first in the world to demonstrate that humans using a noninvasive brain-computer interface can control a quadcopter using brain waves.”

It’s not all for fun and games. The technology holds potential to help people who have suffered paralysis from brain and spinal cord injuries.

“You could help patients who cannot move to turn on the TV, switch the channel, make phone calls, open the door, control a wheelchair, send an email, surf the web—just by thinking about something,” He says. “It could have a huge benefit to the patient.”

The brain benefits, too

Moving objects with only the mind, as one might imag­ine, takes some training. (See sidebar.) But the payoff could be enormous. He and his colleagues believe that learning to use the brain-computer interface will not only offer the external benefits of being able to move an object using thought alone, but also help to re-form connections in the brain that have been damaged by a traumatic brain injury or a stroke, for instance.

“It’s internal modulation,” He says. “Treatment by the subject himself or herself.” 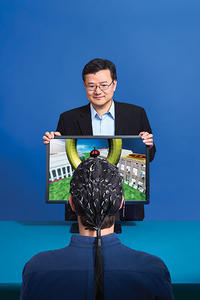 University neurosurgeon Andrew Grande recently collaborated with He on a study to find out whether people who have suffered a stroke could learn the brain-computer interface. Grande and He are now working with U physical therapy professor and stroke rehabilitation expert James Carey to find out if the training, when used in conjunction with transcranial magnetic stimulation (another type of post-stroke ther­apy), can stimulate injured brain cells to help patients regain more function after a stroke.Early and small studies show this works, He says. “It’s promising.”

While using the brain-computer interface exercises to help the brain heal itself is a worthwhile but mighty goal, Grande says its practical uses would be extremely gratifying for his patients.

“If we could just get a stroke patient to open a can of Coke, there probably would be a lot of value to that patient,” he says. “Even the small things would mean a tremendous amount in improving their quality of life.”

He’s determination and drive are behind the suc­cess of his work, no doubt. But he’s quick to credit the muscle behind his mind-control work: the cadre of students on his research team. They don’t just observe the work; they are active and critical par­ticipants in making it happen. The first author on He’s field-changing quadcopter study, published in the prestigious Journal of Neural Engineering, was then-undergraduate student Karl LaFleur (who is now a medical student at the University).

He says he doesn’t believe in simply teaching his students what is already known. Instead, they co-create something new.

Another important element behind his success? The Medtronic-Bakken Chair for Engineering in Medicine, which gives him flexible funding to pursue new ideas or related research tacks—without having to spend time applying for grants that may or may not come through.

“[This funding is] especially good for high-risk, high-reward investigations,” He says. “They may fail, but if you never try, you’ll never get there.”

What’s next for He? Creating a thought-controlled prosthetic arm that could give paralyzed people more independence in their everyday lives.