The Mechanical Engineering Department mourns the passing of Emeritus Professor Joachim (Jockel) V. R. Heberlein on February 17, 2014 after a long battle with ALS.

Then, after working for fourteen years at Westinghouse R&D Center in Pittsburgh where he served as Manager of Applied Plasma Research, Lamp Research and Nuclear and Radiation Technology, he rejoined the Minnesota M.E. Department in 1989 as associate professor. He was promoted to professor in 1994 and was appointed Ernst Eckert Professor of Mechanical Engineering in 2000. He retired at the end of 2012.

He advised or co-advised almost 30 Ph.D. students, an equal number of M.S. students, and advised seven students through completion of their diploma theses at several European universities. He was an internationally recognized authority on the subject of thermal plasmas of the type used for industrial applications such as thermal spray coatings, plasma cutting, electrical circuit breakers, and materials synthesis. He was particularly known for his pioneering studies of arc-electrode interactions. He had many interactions with industry, including research collaborations with Hypertherm on plasma cutting, Eaton Corp. on electrical circuit breakers, and Nitto Denko Technical Corp. on nanomaterials synthesis.

As one measure of his tireless devotion to the Society, he served from 1995-2008 as treasurer of the IUPAC Subcommittee and then the IPCS. He was awarded the 2009 Plasma Chemistry Award, the highest award of the Society, given to one individual at the biennial ISPC for lifetime achievement. The award was presented at ISPC-19, held in Bochum, Germany. Professor Heberlein was also active in the Thermal Spray Society of ASM International and he was elected to the Thermal Spray Hall of Fame in 2004. 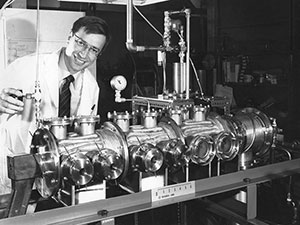 Professor Heberlein was an enthusiastic supporter of international collaboration. He made numerous visits and had fruitful collaborations with colleagues and plasma laboratories in Germany, Italy, Japan, and other countries. He actively arranged exchange programs that allowed students at foreign universities (most notably, the Politecnico di Milano) to complete much of their graduate studies at the University of Minnesota, and he hosted numerous international visitors for stays of a year or more in his laboratory. A remarkable number of these visitors have gone on to positions of prominence at their home institutions and in the wider plasma community.

Professor Heberlein was a key member of the High Temperature and Plasma Laboratory (HTPL) in the M.E. Department. The HTPL is known worldwide as one of the major academic centers of plasma research. Professor Heberlein played an enormous role in promoting the lab and in maintaining its cohesive spirit.

On March 8 and 9, 2013, a celebration of Professor Heberlein’s retirement was held at the University of Minnesota, hosted by the M.E. Department, the HTPL, and the Heberlein family. Approximately 50 plasma scientists attended, from all over the world, including several European countries, Canada, Japan, and Australia. The event was a fitting affirmation of the deep esteem and affection the international plasma community held for Professor Heberlein.

Everyone who knew Jockel knew that he had an amazing work ethic. Many of us were also privileged to know him as a dear friend and colleague. His students were famously devoted to him, and he was beloved among the faculty and staff of the M.E. department. He and his wife Yuko often hosted dinner parties at their house, where they were unfailingly gracious hosts. Jockel loved music, he loved telling stories about adventures past, and he loved sharing good wine. He will be deeply missed.

A celebration of Professor Heberlein’s life will be held at Olivet Congregational Church in St. Paul, Minnesota at 1 p.m. on March 8, with visitation at 12:30 p.m.

Mrs. Heberlein has asked that, instead of flowers, friends consider a donation to causes that were important to Jockel. These are: