In 1914, three young men from Shanghai—two brothers, Wen Huen Pan, who majored in engineering, and Wen Ping Pan, who was a chemistry major, and their friend Yih Kum Kwong, who majored in engineering mining—became the first Chinese students to study at the University of Minnesota. In fact, they were among the earliest Chinese students to attend any American university.

Their courage became the building blocks for today’s 80 academic and strategic partnerships with universities in China. This has translated into 2,500 students and 500 scholars from China hosted on University of Minnesota’s campuses each year.

In 1913, when Wen Ping Pan graduated from Tsing Hua College in Beijing, China, students were not allowed to go to the United States due to the political turmoil in China at the time. Pan had attended the preparatory school—where all classes were taught by American teachers, which explained why he could speak excellent English—with future plans of attending a higher education institution in the U. S.

One year later, Pan finally came to the United States. Traveling first by steamship to San Francisco, he boarded a train and rode for 2,000 miles to Minneapolis. He enrolled in the University’s School of Chemistry, which had been recommended by his American chemistry teacher at Tsing Hua. He had officially become the first Chinese student at the U. 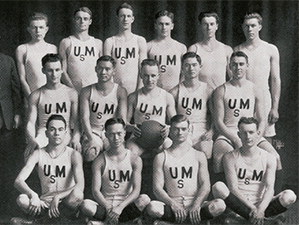 During their University years, all three students were actively involved in various clubs and sports teams. Wen Ping Pan was one of the founding members of the Chinese Student Club and served as its first president. He was also an outstanding athlete and played on the University’s soccer team, along with his brother and Kwong. The sophisticated skills of all three Chinese students led to the University of Minnesota’s championship in 1914.

Pan earned his B.S. degree in chemistry in 1918, and accepted a position as an engineer’s assistant for the summer at Oliver Mining Company in Chisholm, Minn. He returned to the University and earned a M.A. degree in 1919 in metallurgical engineering as one of the first graduate students from the School of Mines.

After graduation, he worked in a gold mine in South Dakota for field experience before accepting a full-time position with the Oliver Mining Division in Hibbing, Minn., where he worked for 40 years, eventually becoming assistant chief mining engineer. When Pan retired in 1959, the Chisholm Tribune Press published an article about his life. It read:

“To come to America was his great dream, and when the opportunity presented itself, he hastened to the portals of the University of Minnesota. He was the first Chinese student at this noted institution and the challenges were great...Mr. Pan loved the American way of life...He believed in the land that he had chosen for his home, and he lived each day as it if were a precious jasmine blossom.”

Building bridges for the next century

The University of Minnesota boasts one of the nation’s longest and deepest relationships between a research university and China. It was one of the first universities to resume academic exchanges with China in 1979, once U.S.-China relations were re-opened. Today, more than 5,000 alumni live in greater China, and more than 10,000 students from China have earned University of Minnesota degrees over the years.

“Whether it’s study abroad in China or another country, we must prepare our Minnesota-born students for a world shaped in important ways by other nations. On our campuses across the state, we must prepare them for global competency.”
--Eric Kaler

As part of a year-long celebration honoring those first Chinese students and the wealth of resulting connections, University of Minnesota President Eric Kaler and several University faculty traveled to China, Hong Kong, and Taiwan for 11 days this past summer to solidify additional research and student and scholarship exchange opportunities.

Nine agreements were signed with some of China’s most prestigious institutions of higher education and research—including an agreement with Hong Kong University of Science and Technology (HKUST). Kaler also visited Hong Kong’s Science and Technology Park to share ideas about innovation and to learn about tech transfer possibilities for University discoveries. Many of the agreements center on working collaboratively to solve the world’s most pressing problems.

One significant relationship was formalized with China’s prestigious Chinese Academy of Sciences (CAS), which focuses on a two-year-long series of joint workshops between University of Minnesota scholars and scientists to seek solutions to air quality in China.

Leading the effort is David Pui, a mechanical engineering professor in the College of Science and Engineering, and a world-renowned expert on air pollutant particles and the standard known as PM 2.5.

Of all 5,537 international students enrolled at the University during Fall 2012, the College of Science and Engineering enrolled the highest percentage of any college at the University with 1,959 students—813 undergraduate, 1,086 graduate, and 60 non-degree. The majority of those students were from China. More than 200 University students take advantage of 15 study abroad programs in China annually.

Currently, about one in every three students gains an international experience. Kaler would like to see that metric rise to 50 percent.

“Whether it’s study abroad in China or another country, we must prepare our Minnesota-born students for a world shaped in important ways by other nations,” said Kaler. “On our campuses across the state, we must prepare them for global competency.”