Maria Gini, a Morse-Alumni Distinguished Professor in the College of Science and Engineering, likes to keep a couple of small robots on chairs next to her desk.

Manufactured by French company Aldebaran, the blue and orange NAO (pronounced “now”) robots were specifically developed to play in an annual robot soccer tournament. The reason Gini, associate head of the Department of Computer Science & Engineering whose research areas include artificial intelligence (AI) and robotics, keeps the toylike devices on display is twofold. First, outfitted with cameras and face- and communication-recognition software, the 23-inch-high robots embody a state-of-the-art answer to making robotic devices fully mobile and interactive. Second, the NAO robots are likely to draw the interest of a certain student demographic Gini wants to attract to her field.

“Because they’re cute and look like children, girls are more likely to be interested in them,” she explains. 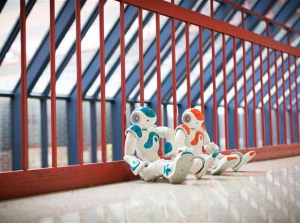 Gini got into robotics more than 30 years ago by way of a fellowship in Stanford University’s AI laboratories. At the time, the entire field was focused on industrial uses of stationary robotic devices, but her team began to insert cameras into the equipment to help control motion. Mobility soon outstripped manipulation as the cutting edge of robotics; today, Gini says, the forefront of research is in robots that interact with other robots—or with people—based on a constant flow of two-way feedback. “With distributed robotics, you can have many robots assigned specialized tasks and working together, or several robots doing the same task but operated by one person,” Gini explains.

Industrial uses for robotics will continue to grow, but Gini expects major growth in nonindustrial areas as well, such as automated flying robots to check crops or traffic.

“The technology for this is ready; it will just take time to commercialize it,” she says. “And on the medical front, there’s continuing development of mini-robots that can be inserted into the body, not just for surgery, but for diagnostic procedures.”

Although the large computer companies in Minnesota are gone, they left behind “a creative workforce that went on to start their own companies in programming, software, design, and medical devices. Robotics are included in all of these fields,” she says. And many have strong U of M connections, including ReconRobotics, whose micro-robot systems are based on technology developed at the U.

Gini also believes robotics offers a special pedagogical advantage. “I am very passionate about education, and I think robotics presents unique potential as a tool to engage the younger generation,” she says.

“Students are already hooked in with things like smart phones. I just take them a step further and ask, ‘Do you want to be a user of technology or an inventor of technology?"

“Most of them will answer: ‘An inventor of technology.'"