Built on the foundation of legendary pioneers, the University of Minnesota prides itself on excellence in the chemical sciences. One of those legends is Izaak Maurits “Piet” Kolthoff, who spent 64 years as a faculty member in the Department of Chemistry, and who is widely considered the “father of modern analytical chemistry.”

His work in establishing the field of analytical chemistry as a scientific discipline was recently named a 2014 American Chemical Society (ACS) National Historic Chemical Landmark. This news coincides with the 100th anniversary of Smith Hall, the classic chemistry building on Northrop Mall, named after Professor Lee Irvin Smith.

By applying fundamental physical principles and insights, Kolthoff transformed chemical analysis from a qualitative to a quantitative science and constructed a firm scientific foundation for analytical chemistry. His research changed the way scientists identify and quantify chemical substances, moving analytical chemistry from a collection of practical recipes and prescriptions to a branch of chemistry grounded on solid theoretical principles and experimental techniques.

Today, analytical chemistry is used in fields as varied as clinical medicine, environmental studies, forensics, and food and drug safety.

Renowned at an early age

Before accepting his position at the University of Minnesota in 1927, Kolthoff had already gained a worldwide reputation.

Born in Almelo, Netherlands on Feb. 11, 1894, Kolthoff’s first chemistry course in high school allowed him to develop a keen interest in the subject. This inspired him to create his own laboratory in his mother’s kitchen. After graduating from high school, he entered the School of Pharmacy at the University of Utrecht in the Netherlands in 1911. Influenced by his mentor and professor Nickolas Skoorl, Kolthoff began to blend the qualitative and quantitative aspects of analytical chemistry. In 1915, he published his first paper on pH, a new concept at the time, and also received his apotheker diploma.

By the time Kolthoff earned his doctorate in chemistry in 1918, he had published 32 papers. After earning his doctorate, Kolthoff remained at the University of Utrecht for nine years, lecturing on electrochemistry, titrimetry, and precipitation.

In 1927, he accepted an offer from the University of Minnesota for a one-year term as a professor in the School of Chemistry, an appointment that quickly became permanent. In 1930, he became head of the school’s analytical chemistry division. Although he officially retired in 1962, Kolthoff continued to conduct research, hold grants, and publish articles until his death, at age 99, in 1993. 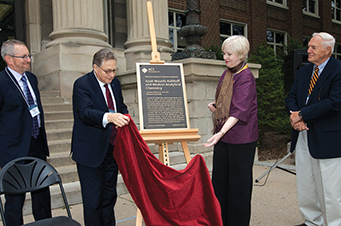 A dedicated but demanding professor, Kolthoff set rigorous standards for his graduate students, many of whom later enjoyed illustrious careers in academia and produced new generations of talented students. By the time he died, Kolthoff’s academic descendants numbered more than 1,100. Of the numerous awards and honors he received, Kolthoff is said to have cherished most an award from the American Chemical Society for excellence in teaching.

Over the course of his career Kolthoff wrote or co-wrote more than 900 papers as well as numerous textbooks.With P. J. Elvin and others, he co-edited the monumental multi-volume Treatise on Analytical Chemistry, the field’s principal reference source. His influential Textbook of Quantitative Inorganic Analysis, first published in 1936, remains a landmark textbook in undergraduate chemistry education.

Kolthoff’s work with acids and bases changed titrimetry from a practical art to an exact science. He is also credited in developing the polarograph, an instrument for recording polarization of electrolytes. Recognizing polarography for its scientific significance and practical importance led to the development of novel methods of environmental trace metal analysis and biological sensors. He was among the first scientists to understand the fundamental significance of crown ethers and their complexes.

Contributor to the war effort

Kolthoff’s work that most directly affected the general public was in the synthetic rubber research program. It was the foremost chemical engineering project during World War II and created a huge synthetic rubber industry in an unbelievably short period of time. Kolthoff, whose family was devastated during Nazi occupation of the Netherlands, quickly assembled a large research group and made major contributions to the program. He and his coworkers held several key patents related to synthetic rubber. Nearly 200,000 tons of synthetic rubber were produced in 1943 and by 1944, the production rate was at 700,000 tons. Over the years the quality of synthetic rubber and the method of constructing tires were both improved, so today we have tires that will run for 60,000 to 80,000 miles compared to tires made exclusively of natural rubber that lasted only 10,000 miles.

“There is no Kolthoff’s Law, no Kolthoff Equation, no Kolthoff method for measuring the amount of X, Y or Z,” said Peter Carr, chemistry professor, who became Kolthoff’s close friend after joining the chemistry faculty at the University of Minnesota in 1977. “His significance, rather, is woven into the basic fabric of modern chemistry, especially analytical chemistry. His work with his student James Lingane on polarography laid the foundation for the major electroanalytical methods of amperometry, linear scan, and cyclic voltammetry. These methods are embedded in and enable the work of many current U of M chemists, including Kent Mann, Larry Que, Connie Lu, Christy Haynes, and untold numbers of chemists and chemical biologists around the world.”

Carr noted Kolthoff’s rigorous evaluation of chemistry gave way not only to better measurements, but to a research philosophy he imparted to his students and colleagues. “In these ways and many others I.M. Kolthoff’s enormous influence shaped the teaching and practice of modern analytical chemistry,” said Carr. “It would not be a mistake to say that hundreds of thousands of chemists and biological scientists use concepts and methods developed by Kolthoff but have no idea whose shoulders they are standing on.”

In 2012, Kolthoff was posthumously inducted into the Minnesota Science and Technology Hall of Fame. Today, the Department of Chemistry continues to honor his legacy with the Kolthoff Lectureship in Chemistry.