Roadway-departure crashes are a major safety issue on both the national and state levels. Rapid advancements in vehicle technology—including systems that warn drivers when they’re leaving their lane or even take control of the vehicle—are opening up possibilities to tackle this challenge. Vehicle manufacturers, however, are unlikely to deploy these technologies widely until high-accuracy maps of lane and road boundaries are available nationwide.

To help acquire this road geometry information, U of M researchers have developed and evaluated a low-cost mobile data-collection platform. Mounted on a vehicle, the system consists of a GPS receiver capable of receiving real-time corrections, a LIDAR (light detection and ranging) scanner, and a computer—all costing roughly $40,000.

“Using this hardware, the system was able to detect and position curbs and guardrails with an accuracy of better than 4 inches,” says Brian Davis, a research fellow in the Department of Mechanical Engineering. “It could also determine road centerlines to within 2 inches relying only on the GPS-provided data.”

Also as part of their work, the researchers created an algorithm to process the data after collection to reduce the need for costly manual extraction of road features. Davis co-authored the final report with principal investigator Max Donath, director of the U’s Roadway Safety Institute.

The new system can serve multiple purposes and could especially benefit rural counties, which typically do not have access to high-end data-collection systems. “For example, more accurate measures of road curvature acquired inexpensively and automatically could be used to better match speed limits with curves and provide curve-speed warnings using smartphones, especially where low average daily traffic volumes do not justify signage on a system-wide basis,” Davis says. 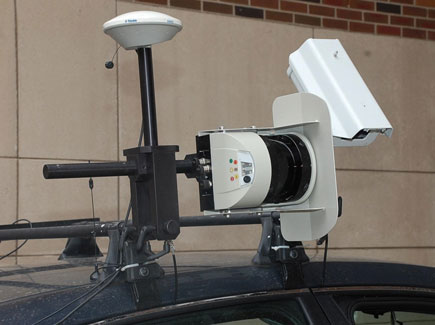 The sensor platform can be installed on various types of vehicles. Photo: Mechanical Engineering

Rick West, the project technical liaison and a rural Minnesota county engineer in Otter Tail County, had two goals for the project. “The first one was to determine if low-cost data-collection equipment could be developed,” he says. “The second was whether this equipment would provide data with the necessary level of accuracy without complex post-collection data analysis. Both goals were achieved.”

Up-to-date, detailed information is also needed for other organizational functions, such as maintaining maps for network-level analysis, tracking roadway assets, and assessing pavement quality to inform maintenance decisions. Generally, however, units collect only the information they need to perform their particular function, which leads to multiple, separate data-collection efforts.

The new system offers a way to make these efforts more efficient. “In addition to collecting data for multiple functions at once, the system can be installed on vehicles already traveling the roads for other purposes, such as MnDOT’s pavement monitoring van,” Davis says. “Data can be acquired without the added operational costs to fund additional drivers and operators.”

In the second phase of the project, researchers augmented the system with a video camera to allow automated fog line detection and location. “Testing demonstrated an accuracy generally better than 3 inches,” Davis says. LIDAR wasn’t needed, which reduced the cost of the sensor suite to $30,000 for the application.

Reprinted with permission from the May 2015 issue of CTS Catalyst, a publication of the University of Minnesota Center for Transportation Studies.