The great eras of mankind are defined by materials that shape technology. In the 19th century, it was steel. Later came new alloys that redefined manufacturing. Today’s technology is shaped by plastic and semiconductors. And tomorrow may be defined by organic chemicals, says Distinguished McKnight Professor Daniel Frisbie.

Frisbie describes a world with infinite technological possibilities: a world where printable electronics and flexible substrates change the way we interact with our devices and with one another.

Fifteen years ago, Frisbie predicted that organic materials could be complementary to silicon as the foundation for electronic devices. Today, his work proves that “molecular electronics” hold a promising place in the booming silicon electronics industry.

Regarded by his colleagues as a true pioneer of organic materials, Frisbie focuses on organic semiconductors — materials that function similarly to conventional semiconductors like silicon, but have an enhanced processability.

These materials form the basis for metallic, semiconducting and insulating inks that could someday be written onto plastic or paper substrates, using printing methods. The flexibility of these materials could have applications for biomedical technology, energy conversion, wearable electronics, robotics and displays.

“Someday we may be able to print a solar cell,” he says. “You would want a panel that covers large areas, is pliable, and is more durable. Flexible substrates would enable that.”

Not only could organic semiconductor materials improve and advance technology as we know it, it could make those gadgets cheaper.

Making computer chips is an expensive business. Manufacturers invest billions in fabrication lines for the newest chip, only to become obsolete within a few short years. Organic semiconductors could be fashioned using inexpensive materials and existing printing technology, building on the possibilities of silicon. 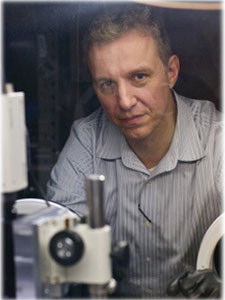 Before we can begin printing gadgets, Frisbie and his team must overcome some basic challenges, like how to improve the performance of organic materials.

“There’s still a lot we don’t understand about how electricity conducts in these kinds of materials,” he says. “Then there’s the problem of resolution. The printing has to be done precisely. Misregistration of inks will cause circuits not to work.”

Although it may be decades away, Frisbie is confident his work could contribute to a boon of new ideas and technology.

“The development of silicon microelectronics took decades, and once it was developed, there was an incredible blossoming of applications, which has now gone on for decades. But the core technology took a while to build. Now we’re in this building phase where we’re trying to develop a printable technology, and when we get there, there will be a proliferation of ideas.”

When asked about the rapidly changing landscape of chemical engineering and materials science, Frisbie points to the following trends:

Biomaterials: Scientists in a multitude of disciplines are interested in developing biomaterials — materials with biological properties, like artificial tissues.

Wearable electronics: Apparel manufacturers are increasingly interested in technology that tunes into and is responsive to the body. Frisbie’s research could enable development of robotic e-skins and wearable biosensors.

Republished with permission from Research @ the U of M, a publication of the Office of the Vice President for Research.