Before a small startup team overshot its Kickstarter goal last summer by almost $600,000 and garnered widespread interest in their smart water bottle technology, they were University of Minnesota business, engineering and design students honing their knack for entrepreneurship through mentorship opportunities and experiential learning.

They have already generated buzz in publications like Wired, Fast Company, Forbes, and Business Insider and spurred more than 8,000 Kickstarter pledges. But in many ways, their entrepreneurial spirit began before Hidrate, during their undergraduate years at the U.

“We learned to get to the core of what the customer wants and understand how they find out about products,” Nguyen said.

How it all began

Nguyen first drew interest in entrepreneurship while working for TEDx UMN — an annual event that aims to bring speakers, researchers and inventors together at the U of M to showcase their work and discuss big ideas. She learned from the entrepreneurs at these events what it was like to start an organization from scratch and build a team to move it forward. Nguyen later joined a student-run startup called The Echo Spot, which offered students a space to anonymously voice concerns about the U.

During their time at the U, the students who would later become the Hidrate team learned what they needed to succeed from U entrepreneurship experts like Tobin Nord, professional director of the Ventures Enterprise, and John Stavig, professional director of the Gary S. Holmes Center for Entrepreneurship. And in the College of Design, Barry Kudrowitz, Ph.D., professor of product design, helped Hidrate’s Iverson and Hambrock learn important design concepts they later used in developing the smart water bottle.

“As students, they gained exposure to the process of developing new products and launching a business, and learned key concepts like how to deal with uncertainty, develop initial customers, secure partners, build a team and get advice,” Stavig said.

“By the time they launched Hidrate, they were no longer first-time entrepreneurs and had the self-confidence and awareness of how to move forward.”

A bottle that reminds you to drink

Nguyen first thought of the idea behind Hidrate in July 2014 after she realized the headache and sluggishness she felt at the end of a busy day were from dehydration. After asking around, she found she wasn’t the only one who sometimes forgot to drink enough water.

Two months later, Nguyen gathered a team to participate in Google Startup weekend, an event at the U’s Carlson School of Management. There they built the smart water bottle prototype, which garnered so much interest that they decided to run with the idea. They created a Kickstarter to fund their project, aiming to raise $35,000. They topped their goal in just 24 hours, and by mid-July had more than 8,000 backers pledging over $627,000 to the project. 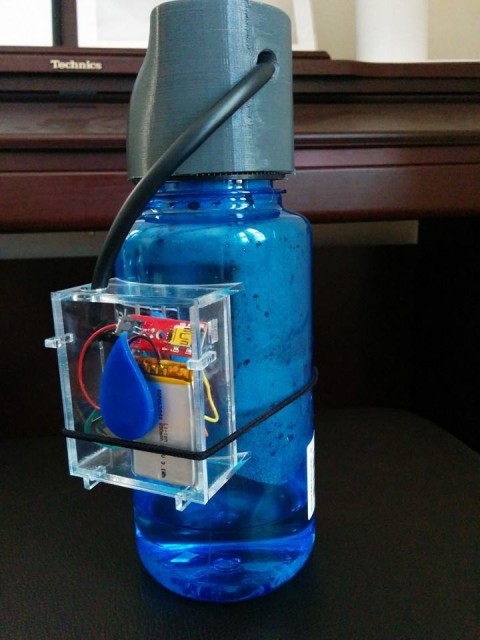 The Hidrate smart water bottle has come a long way from this early prototype.

Hidrate’s smart water bottle has come a long way since the first prototype, in part because the team members quit their jobs and have been working about 80 hours a week to move their idea forward. They have developed a smartphone app to communicate with the water bottle. The app takes users’ height, weight and age into account, along with environmental factors like temperature, humidity and elevation, to calculate how much water the person should drink each day. A sensor in the bottle then relays how much liquid they consume to the app. When it’s time to drink more, the app shows a reminder on the screen and the bottle itself glows.

The smart water bottle idea earned the Hidrate team a spot in the 2015 Sprint Mobile Health Accelerator, a three-month startup program held in Kansas City. While there, the Hidrate team focused on creating new batches of 3D-printed molds to test different prototype designs. They also surveyed more than 500 people to understand who their audience was for the smart water bottle.

The team has spent the last several months fine-tuning the bottle’s design. In September, they cut molds for production and spent a few months product testing and tweaking. Nguyen said it was encouraging to see such an enthusiastic reception for their invention after all the effort they put in.

“We just did our best, we just kept pushing for it,” Nguyen said. “It gives us so much confidence that this is something so worth pursuing.”

Adapted and reprinted with permission from Inquiry.