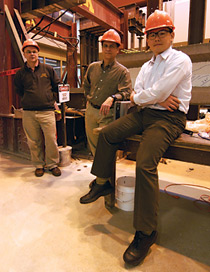 Preliminary results of the University of Minnesota's independent academic study of the I-35W bridge collapse suggest that lack of robustness in the bridge's original design, additional load from bridge improvements over the years, weight from construction materials and stresses induced by temperature changes contributed to the collapse of the I-35W bridge on August 1, 2007.

Researchers involved in the study include civil engineering faculty Roberto Ballarini, Taichiro Okazaki, Ted Galambos and Arturo Schultz. The preliminary results of the yearlong study by civil engineering researchers at the University of Minnesota were released Nov. 19 to a crowd of about 400 people attending the University's Institute of Technology Public Lecture "Investing in Infrastructure."

The University's findings are consistent with the National Transportation Safety Board's final report summary and the report prepared by Wiss, Janney, Elstner Associates (consultants retained by the Minnesota Department of Transportation).

Highlights of the University of Minnesota academic study revealed the following:

"The gusset plates at the time of collapse were in a state of instability. In essence the demand on them was equal to their capacity, and they simply gave way," said civil engineering professor and department head Roberto Ballarini.

The researchers conducted their study of the gusset plates in two stages. In the first stage, they created two-dimensional and three-dimensional computer models representing the whole bridge. The second stage consisted of applying the forces calculated in these models to a detailed computer model of the node of the bridge that involved the suspected gusset plate.

"Our computer simulation shows a pattern of very high stresses within the gusset plate that are consistent with the locations and directions of the tears observed in photos of the fractured gussets." Ballarini said.

The researchers plan to publish their final results in an academic research paper within the next six months. The University of Minnesota study was funded by a grant from the National Science Foundation, the University's Center for Transportation Studies and the University’s Department of Civil Engineering.

A computerized simulation used in the University's I-35W bridge study showing the stress on the bridge gusset plates is available online at www.umn.edu/urelate/newsservice/Multimedia_Videos/bridge_sim.htm.