What is C-SPIN all about?

It’s one of the largest research centers on campus. It boasts funding from industry, academia, and the federal government. It’s building the foundations fast and ultra-energy-efficient computers. It’s C-SPIN, and you’ve probably never heard of it.

The Center for Spintronic Materials, Interfaces, and Novel Architectures (C-SPIN) is in its second year of operation and has moved to the surprisingly bright and airy first floor of Keller Hall. What is C-SPIN all about? Well…

It’s about staving off the end times.

That may sound odd, but consider the simple field effect transistor (FET), the basic building block of all modern computing devices. Each FET has a gate. When it opens, electric current runs through it and we have a “1.” When the gate closes, it’s a “0.” About 20 years ago, the average FET in an average computer was 500 nanometers wide. That number dropped to 32 by 2010 and is now 14. But the laws of physics essentially say that the “end times” of this technology are near. There’s simply no way to make FETs smaller without overheating the computers they are in. So we’re rethinking computers from the transistor up so that they can keep getting faster, smaller, and more energy efficient.

Electrons have charge, but they also have “spin,” which is characterized by scientists as “up” or “down.” Electrons in magnetic materials tend to spin in the same direction, so a spin-based switch would look something like the picture above. “Up” spin in Magnets A and B = “1”, and “down” spins = “0.” One fundamental task for C-SPIN is to figure out which materials work together to make this switch a reality.

Switching a FET is relatively simple: open the gate to get a “1” and close the gate to get a “0”. It’s a little trickier with spin. For electrons in Magnet A to influence the spin of electrons in Magnet B, there has to be a “spin current” traveling between them. The electrons that make up a spin current don’t have to move, but they do have to switch their spin and get their neighboring electrons to do the same, kind of like dominoes being able to fall in either direction. We’re determining how to make switching happen at room temperature with as little energy input as possible. 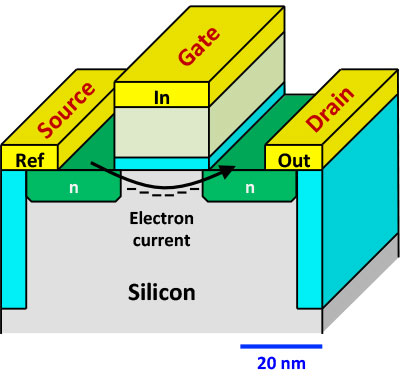 It's about transferring spin-based information.

All those spin-based zeroes and ones have to be “communicated” to different parts of a computer, so we’re building and testing devices that read, translate, and transfer spin information quickly, efficiently, and (again) at room temperature.

Spin-based computing devices are different sizes and shapes than their FET counterparts, so putting billions of them together requires new kinds of computer designs. We are even experimenting with hybrid FET-spin architectures that enable systems to learn and adapt in ways that resemble neuron pathways in the brain.

C-SPIN brings together 32 scientists and over 100 graduate and postdoctoral students from 18 universities. Research projects typically involve at least a half-dozen experts from a wide range of fields. Building a functional spin switch, for example, has involved materials scientists (to predict and demonstrate which materials will most likely work best together), nanofabrication experts (to build prototypes), electron microscopy specialists (to see what was actually built), spin measurement experts (to determine a prototype’s spin properties), and theoreticians (to figure out why a prototype has certain properties). And that’s just one of the dozen or so projects we have going at any given time. Moreover, all of our projects are “original.” Everything we investigate, build, and test has never been investigated, built, or tested before, so we’re constantly wondering what we’ll discover next.

C-SPIN is one of six research centers sponsored by the Semiconductor Research Corporation STARnet program, a network of research centers dedicated to breaking through the fundamental barriers facing the microelectronics industry. STARnet is supported by seven companies (IBM, Intel, Applied Materials, Global Foundries, Micron, Raytheon, Texas Instruments, and United Technologies) and the Defense Advanced Research Project Agency. We are proud to collaborate with industry partners, the Department of Defense, and other STARnet Centers as the center looks for ways to stave off the end times and make computers better than ever before.