Sometimes Isaac Hayes glances at his Twitter feed and sees friends complaining about being bored. He can only roll his eyes.

Idleness is the least of his worries. His challenge is time. Hayes, who is majoring in mechanical engineering, also plays right guard on the Minnesota Gophers football team—and those responsibilities keep him booked from morning until bedtime.

“I’ve had an interest in engineering all my life. I like building things and understanding the mechanics."

Hayes looks like an offensive lineman, which is to say he’s built like a refrigerator. He stands 6-foot- 2 and weighs more than 300 pounds. He was a star player at St. Thomas Academy in Mendota Heights, Minn., where he was ranked as the ninth offensive guard nationwide by ESPN. He grew up watching Gophers football and chose the University of Minnesota because of his affection for his hometown team and rapport with football coach Jerry Kill. 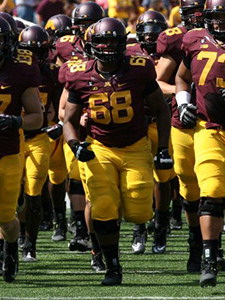 Hayes devotes 20 hours per week to football. His commitment extends well beyond practice time on the field. It also includes three weightlifting sessions per week plus many hours reviewing game films and team meetings.

He gets home at 7:30 p.m. and spends his evenings studying. This past fall, he labored over calculus, in addition to building circuits and designing a robot that will shoot disks for his mechanical engineering class. He takes advantage of academic tutors at the McNamara Academic Center for Student-Athletes.

A second year student (he redshirted his first year and remains a freshman in terms of athletic eligibility), he spends up to 25 hours per week on academics.

“I’ve had an interest in engineering all my life,” he said. “I like building things and understanding the mechanics. When I was little, I used to take things apart like my toys just to see how they worked.”

Time management is a familiar challenge. In high school, Hayes commuted 45 minutes each way from his home in Brooklyn Park, Minn. to St. Thomas Academy and often wouldn’t get home until 6:30 p.m. He learned that time management, like a good offense, requires strategic planning. He writes everything in his planner and prioritizes work accordingly.

“Sometimes I’ll see people on Twitter saying, they’re going home to chill or watch movies and stuff like that,” he said. “I’m sitting there saying, ‘I’m going to go home to do four hours of homework.’”