Justine Cherwink is a gymnast who knows how to balance.

This goes far beyond tumbling on the floor or flipping across a balance beam. The CSE senior from Aledo, Texas manages the workload of a chemical engineering major with the regimen of a Division I gymnast. She’s also minoring in business management.

“Starting my freshman year, when I realized school was going to be pretty intense in chemical engineering, I banned myself from any sort of social media or any of those silly, time-consuming things,” said Cherwink. “It mainly comes down to prioritizing. I look at my assignments and things to do, rank them in urgency, and work on them in that order until I get them done.”

She does get a lot done. Cherwink trains 30 hours per week, including coached practice in the gym, rehab, and supplemental training such as lifting weights. In season, she competes every week. Half of those competitions involve travel. 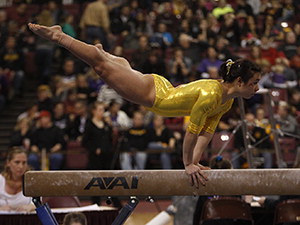 A petite 5-feet (the shortest one on the team), Cherwink has soldiered on despite two serious injuries. In her freshman year at Minnesota, she tore her left Achilles tendon and had surgery to repair it. “I asked the surgeon if I could stay awake and he let me watch it,” she recalls. “I just got a spinal tap. I saw him sew the two pieces back together. I was interested in med school for a little bit.”

The next year she tore the other Achilles tendon and had surgery again. Within four months she was competing on parallel bars again. One month after that, she was competing vault as well. Since then she has remained free of injury—although that requires many hours in the training room and constantly managing little aches and preventing them from turning into bigger problems.

“It mainly comes down to prioritizing. I look at my assignments and things to do, rank them in urgency, and work on them in that order until I get them done.”

Schoolwork consumes her remaining time. She often sleeps only six hours—and sometimes half of that when under the deadline of a school project. Much of her day is spent in two locations: Peik Gym and the Department of Chemical Engineering and Materials Science in Amundson Hall.

“We have a ChemE lounge that’s open 24 hours per day,” she said. “We spend nights working on lab reports there. It has a couch, microwaves, and everything you need for an all-nighter.”

Her social life is limited to her teammates and fellow chemical engineering students. She doesn’t dabble in social media. She loves to play ultimate Frisbee and read but doesn’t get the chance to do much of either. “It’s all-consuming,” she said.

Even so, Cherwink also has learned that life can’t be all work and no play. She makes sure to pepper her schedule with occasional fun events like meeting a friend for coffee or the even the occasional game of Frisbee.

Her advice? “Make sure you save a little time for a few things you like to do, just so you have those to look forward to,” she said. “You can’t go nonstop. I’ve tried, and broken down.”