Gap results in an estimated 7,000 deaths each year among people of color from heart disease alone

MINNEAPOLIS / ST. PAUL (04/15/2014) — A first-of-its-kind study by researchers at the University of Minnesota found that on average nationally, people of color are exposed to 38 percent higher levels of nitrogen dioxide (NO2) outdoor air pollution compared to white people.

Nitrogen dioxide comes from sources like vehicle exhaust and power plants. Breathing NO2 is linked to asthma symptoms and heart disease. The Environmental Protection Agency has listed it as one of the seven key air pollutants it monitors. The researchers studied NO2 levels in urban areas across the country and compared specific areas within the cities based on populations defined in the U.S. Census as “nonwhite” or “white.”

The health impacts from the difference in levels between whites and nonwhites found in the study are substantial. For example, researchers estimate that if nonwhites breathed the lower NO2 levels experienced by whites, it would prevent 7,000 deaths from heart disease alone among nonwhites each year.

The study entitled “National patterns in environmental injustice and inequality: Outdoor NO2 air pollution in the United States” was published in the April 15 issue of PLOS ONE, a leading peer-reviewed scientific journal.

“We were quite shocked to find such a large disparity between whites and nonwhites related to air pollution,” said Julian Marshall, a civil engineering associate professor in the University of Minnesota’s College of Science and Engineering and co-author of the study. “Our study provides a great baseline to track over time on important issues of environmental injustice and inequality in our country.”

Other U.S. studies have documented disparities in exposures to environmental risks, including air pollution, but this research goes beyond previous studies of specific cities, communities or regions within the nation. This new study is the first to use satellite observations, measurements by the Environmental Protection Agency, and maps of land uses to explore disparities in exposure to air pollution for the U.S. nationwide, including both rural and urban areas, with comparisons by city, county, state and region.

The new research builds on a recently published University of Minnesota study that used satellite data and land use information to look at nitrogen dioxide pollution throughout the continental United States (excluding Alaska and Hawaii), including all 448 urban areas defined by the U.S. Census. In the present study, the researchers overlaid the pollution information with U.S. Census data about where people live. The results provide groundbreaking evidence of environmental disparities nationwide.

The 15 states with the largest exposure gaps between whites and nonwhites were (from highest disparity to lower): 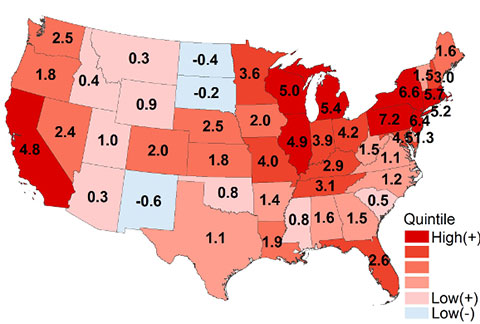 Difference in population-weighted mean NO2 concentrations (ppb) between lower-income nonwhites and higher-income whites for U.S. states.

The 15 urban areas* with the largest exposure gaps between whites and nonwhites were (from highest disparity to lower):

* As defined by the U.S. Census 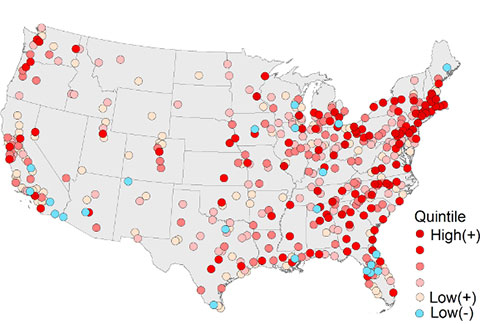 Visit the University of Minnesota Marshall Research Group website for the full listing of states and urban areas studied.

“Our findings are of broad interest to researchers, policy makers and city planners,” said Lara Clark, co-author of the study and civil engineering Ph.D. student in the University of Minnesota’s College of Science and Engineering. “The next step in the research would be to look at why this disparity occurs and what we can do to solve it.”

In addition to Marshall and Clark, Dylan Millet, an associate professor in the Department of Soil, Water and Climate in the University of Minnesota’s College of Food, Agricultural and Natural Resource Sciences was also a co-author of the study. Marshall and Millet are also resident fellows in the University of Minnesota's Institute on the Environment.