MINNEAPOLIS/ST. PAUL (05/13/2015)—A new study led by researchers at the University of Minnesota has found a three-way link among antibiotic use in infants, changes in the gut bacteria, and disease later in life. The imbalances in gut microbes, called dysbiosis, have been tied to infectious diseases, allergies and other autoimmune disorders, and even obesity, later in life.

Antibiotics are by far the most common prescription drugs given to children. They account for about one-fourth of all medications prescribed to children, with a third of these prescriptions considered unnecessary. Other studies have shown profound short- and long-term effects of antibiotics on the diversity and composition of the bacteria in our bodies, called our microbiome.

“Diseases related to metabolism and the immune system are increasing dramatically, and in many cases we don’t know why,” said the study’s senior author Dan Knights, a computational biologist and assistant professor in the University of Minnesota’s Department of Computer Science and Engineering and Biotechnology Institute. “Previous studies showed links between antibiotic use and unbalanced gut bacteria, and others showed links between unbalanced gut bacteria and adult disease. Over the past year we synthesized hundreds of studies and found evidence of strong correlations between antibiotic use, changes in gut bacteria, and disease in adulthood.”

Knights and his colleagues developed a framework to map how antibiotics may be acting in the gut to cause disease later in life. In the case of allergies, for example, the use of antibiotics may eradicate key gut bacteria that help immune cells mature. These cells would have been essential for keeping the immune system at bay when confronted with allergens. Even if these bacteria return, the immune system remains impaired. Related to obesity, antibiotic-induced changes in the gut microbiota resulted in increased levels of short-chain fatty acids that affect metabolism. 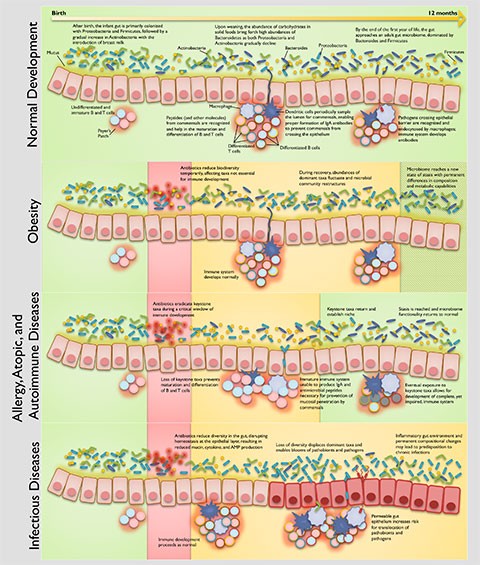 The study also examined the development of bacteria in the gut. Researchers demonstrated that an infant’s age could be predicted within 1.3 months based on the maturity of their gut bacteria. This finding could lead to a clinical test and interventions for children whose microbiome is developmentally delayed due to antibiotics or other factors.

“We think these findings help develop a roadmap for future research to determine the health consequences of antibiotic use and for recommendations for prescribing them,” Knights said. “The clinical test we demonstrated would also allow us to think about interventions at an early age.”

In addition to Knights and Vangay, researchers involved in the study include Tonya Ward, a postdoctoral researcher in the University of Minnesota Biotechnology Institute and Jeffery Gerber, a researcher with the Division of Infectious Diseases at the Children's Hospital of Philadelphia.