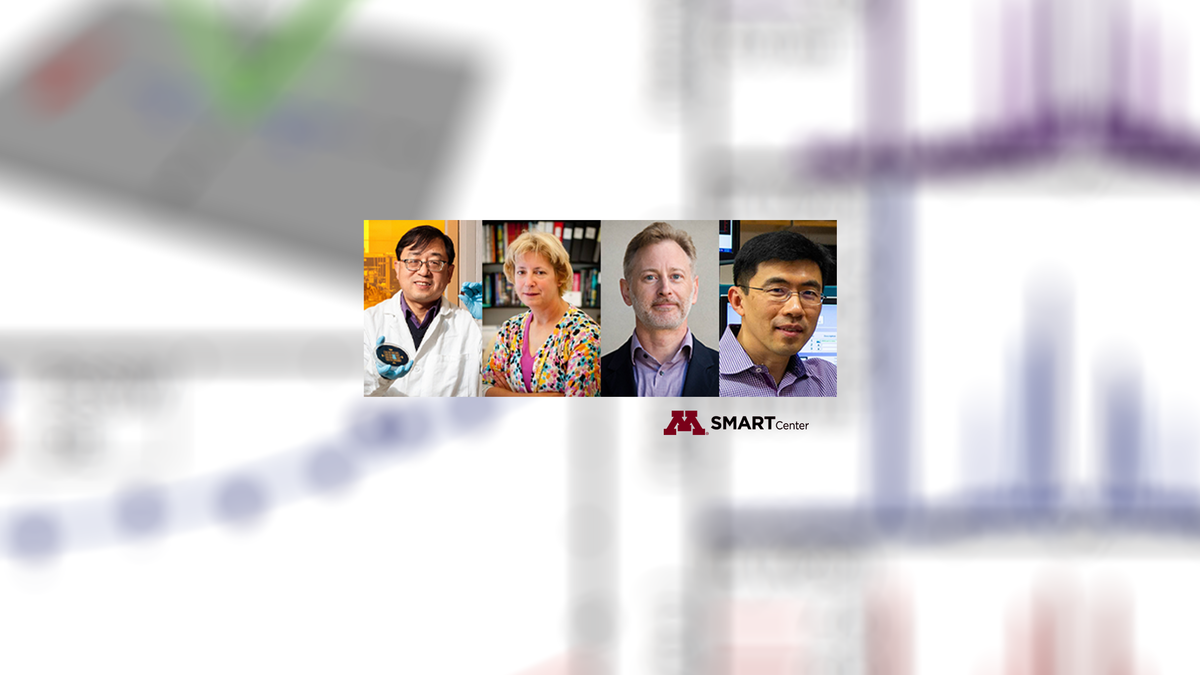 The SMART Center is entering its third year of materials research. You can view highlights of the last few months below!

Atomic layer of hydrogen adds a new twist to nanomagnets

More from the SMART Center 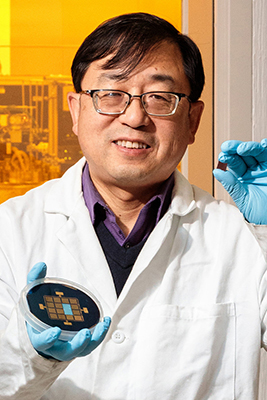 The SMART Center is continually focused on synthesizing, characterizing, and validating three categories of spintronic materials: Theme 1 - Spin-orbit torque materials, Theme 2 - Ultra-low loss spin-wave materials, and Theme 3 - Magneto-ionic materials.  All of this materials-related research has been benchmarked around novel spintronic devices for advanced memory and computing applications. SMART PIs have been making solid progress on these three topics in the past half-year. As you can see throughout this first SMART Center Newsletter, we are continuing to work hard in achieving original center goals while striving for much more.

As you can read about in the full newsletter article, the experimental demonstration of the fastest domain wall movement yet recorded, ~4000 m/s, using the spin-orbit torque (SOT) driving mode based on low-damping PMA Bi:YIG [P101142, Science 370, 1438 (2020)] by Professors Ross and Beach. This demonstration reduces the energy-delay product by nearly a factor of three for the proposed CoMET device designed by Professor Wang and his colleagues and benchmarked by Prof. Naeemi, one of two spintronic devices that outperform the CMOS devices, for advanced computing.

Two big 'unexpected' results were achieved by the SMART Center in the past half-year. Professor Ross discovered a new mechanism to obtain multiferroicity (i.e. a substantial ferroelectric response combined with magnetic order) in orthoferrite YFeO3 with excess Y, resulting from antisite defects. This provides a path towards a new class of multiferroics that may be useful in magnetoelectric devices. Professor Low and I designed, predicted, and validated using spin transport theory, a chiral magnetic tunnel junction based on magnetic Weyl semimetals, which possesses a gigantic TMR ratio up to 104 %. This is one order of magnitude larger than the famous theoretical prediction of Fe/MgO/Fe MTJ that has been used in STT-RAM product. A joint patent was filed recently and a paper is under review [P102460].

To date, 29 students and postdoctoral fellows have been carrying out the proposed research. Six e-workshops held by Professors Ross, Crowell, and Beach were delivered in the past half-year. Additionally, six theme-based liaisons meetings (1.5 hrs each) from each theme occurred with another set scheduled for Thursday, May 13, 2021 and will include presentations from cross-theme PI's Andre Mkhoyan and Tony Low.

We look forward to a summer full of discovery, 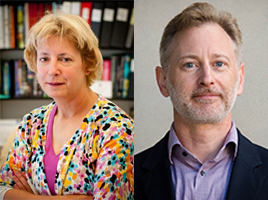 A multi-institutional team of scientists led by Professors Caroline Ross (left) and Geoffrey Beach (right) from the Massachusetts Institute of Technology (MIT) have shown domain walls in a low-dissipation ferrimagnetic iron garnet reach record current-driven velocities. Their findings are particularly significant as they offer an insight into magnetization dynamics. The results of the study have been published in their paper titled, “Relativistic kinematics of a magnetic soliton” in Science. The study is the outcome of collaboration among researchers at MIT, multiple departments at Korea University, and Korea Advanced Institute of Science and Technology.

The study of domain wall (DW) dynamics was conducted on films of bismuth yttrium iron garnet, a perpendicularly magnetized ferrimagnetic insulator. A torque was generated from the spin current produced by an electrical current in an overlayer of platinum via the spin Hall effect. This drives current-induced switching and fast domain wall motion in the magnetic film, even though no electrical current flows in it. Using these spin currents to drive the domain walls, the team achieved record velocities exceeding 4300 m/s, which is within 10% of the speed limit. The results are of consequence to the understanding of the dynamic behavior of solitons or domain walls at ultrafast velocities. They establish the limits of domain wall speed, and also offer a readily accessible experimental framework to study relativistic solitonic physics. Ross led the development of the epitaxial bismuth-substituted yttrium iron garnet, while Professor Geoffrey Beach whose expertise lies in DW dynamics led the analysis of the behavior of the material.

The findings on DW velocity have significant implications. The recorded velocity indicates that the material can undergo very fast switching, which in turn implies that domain wall devices could operate at very high speeds. As traditional silicon devices become smaller and faster, they are limited by their high power consumption. Magnetic materials such as yttrium iron garnet could provide new functionality to silicon and be used in future memory or logic devices, helping the industry step beyond CMOS. Although there is a long way to go before we see them in use at the commercial level, these findings are critical. According to Ross, “This is an enabling technology. We now know how to move these domain walls very quickly, which opens up the possibility of building a domain wall device.”

Besides the applications of DW velocities, the observations also present a ready framework to study relativistic physics. As the DW closes in on its speed limit which is the magnon group velocity, it shows changes in its size and geometry. This has analogies with the relativistic increase in mass and time dilation experienced by objects as they approach the speed of light. For scientists interested in examining relativistic effects, the study can now be undertaken by means of a material system rather than by accelerating particles to high speeds.

As a materials scientist, Ross, a faculty member at MIT and associate director of the SMART Center, focuses largely on complex oxides including garnets, perovskites and spinels, on self-assembled composites, and on the self-assembly of polymer systems useful for nanofabrication. Her other research projects use garnets in other contexts, such as optical isolators which control the flow of light in integrated photonic circuits. These interests intersect with the goals of the SMART Center whose mission is to create new materials and phenomena for the purpose of building spintronic devices. In her work with the Center, Ross has directed her attention to magnetic and multiferroic oxide materials that could lead to beyond-CMOS devices based on integrating non-traditional oxide materials with silicon.

Ross’ recent work points to some key outcomes and future steps. Firstly, it gives scientists an insight into how to design materials that will be most useful for high-speed magnetic devices and how to integrate them on silicon. Having understood the phenomena that govern the ultimate speed limit, the group can now turn their attention to whether the speed limit can be pushed even higher through materials design. Secondly, from the perspective of industry sponsors supporting such research, there is immense technological benefit; this study proves that such high-velocity phenomena can indeed be attained, which gives impetus to the development of spintronic devices. If silicon devices are ever to be replaced, the new device technology has to be enormously better in some aspect to make the change worth pursuing, and this work provides an inducement to continue designing materials with even better performance. The development could encourage and excite the scientific community to continue developing spintronic logic and memory devices.

Centers like SMART, supported by industry and other entities, play a critical role in the advancement of science and technology. Sponsors benefit from supporting them: they gain early access to research outcomes (materials and/or phenomena), and have the advantage of diverse scientific expertise working together toward the same mission. And for researchers, spaces like SMART afford them the opportunity to work in convergent ways, drawing on each other’s techniques, materials, and expertise. In the case of the SMART Center, research outcomes will help industry find a path beyond CMOS.

Atomic layer of hydrogen adds a new twist to nanomagnets 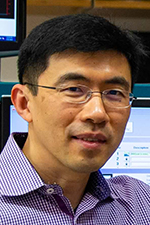 Chiral magnets have the potential to act as energy-efficient information carriers. In a chiral magnet, the magnetic moments adopt a winding arrangement, as opposed to the linear arrangements usually seen in ferromagnets and antiferromagnets. In very thin films, this chiral structure arises from an antisymmetric exchange interaction between adjacent spins known as the Dzyaloshinskii-Moriya interaction, or DMI. The interfacial DMI is usually found in magnetic layers in proximity to heavy metals due to the strong spin-orbit coupling.

In a paper just published in Physical Review X, SMART PI Kai Liu and his team report a fundamentally new way to induce the DMI: Adsorption of hydrogen onto a ferromagnetic surface not only instigates the interaction but also allows them to dial its strength up or down on demand, and switch the magnetic chirality of domain walls. Their chemisorption approach is a striking exception involving a system with the lightest element. Using spin-polarized low-energy electron microscopy, they directly “visualize” the arrangement of magnetic moments on the domain walls. In each experiment, they can monitor these structures in real-time, which allows them to track changes of the DMI via hydrogen adsorption and desorption.

These results offer new opportunities for novel chiral spintronics and magneto-ionics. A key advantage is that the switching via chemisorption may be done in a tunable and contactless fashion, without requiring electrical leads to be attached to the device. This is particularly attractive for complex device geometries such as the envisioned 3-dimensional information storage such as racetrack memories and networks involving numerous domain walls or skyrmions. These effects can also be readily integrated into solid-state magneto-ionic devices. A patent application was filed.

Read the paper in Nano Letters, which has been featured in a press release from the American Chemical Society.

More from the SMART Center: