Office of the Dean

Andrew G. Alleyne became dean of the University of Minnesota College of Science and Engineering (CSE) on Jan. 10, 2022. As CSE dean, Alleyne is the college’s chief executive officer and chief academic officer. He provides collaborative leadership to maintain and enhance the college's excellence as a global leader in research and education encompassing the physical sciences, engineering, mathematics, and computer science.

An accomplished researcher, educator and academic leader, Alleyne was previously at the University of Illinois at Urbana-Champaign (UIUC), where he was the Ralph M. and Catherine V. Fisher Professor in Engineering and director of a multi-university research center sponsored by the National Science Foundation.

Alleyne is widely recognized for his research to develop innovative systems and tools for energy and power systems, manufacturing systems, and transportation systems. Prior to coming to the University of Minnesota, he was a faculty member in mechanical science and engineering at UIUC since 1994, and served in multiple academic leadership roles at all levels of the institution.

He led the National Science Foundation Engineering Research Center on Power Optimization of Electro Thermal Systems (POETS), an ambitious multidisciplinary center based at UIUC in partnership with three other U.S. universities, two international institutions, and many industry and government partners. Bringing together electrical engineers, mechanical engineers, materials scientists, and physicists, the center’s focus is developing new ways to control the flow of energy in the mobile electrified systems needed for cars, ships, and planes—ultimately to make transportation more efficient and environmentally sustainable. The center encompasses related activities in graduate education and workforce development as well as K–12 outreach.

Alleyne also served for four years as associate dean for research in the UIUC Grainger College of Engineering, overseeing the research interests of 13 departments and collaborating broadly to strategically strengthen the college’s research portfolio, including leading the development of new cross-college research centers and a translational research institute. He served a term as associate department head for the Department of Mechanical Science and Engineering.

For half a decade, he led the department’s faculty recruiting committee, where he developed a multi-year plan that increased the hiring of women and underrepresented minority faculty. He helped to advance many initiatives to recruit underrepresented talent into academia, including initiating the Graduate Engineers Diversifying Illinois program on the UIUC campus and serving as its faculty mentor. He has received many awards for his teaching, advising, and mentoring of both undergraduate and graduate students.

He has published and presented widely and throughout his career has received many awards and recognitions for his scholarship. He holds distinguished recognition as a fellow of the American Society of Mechanical Engineers, the Institute of Electrical and Electronics Engineers, and the American Association for the Advancement of Science. Among many collaborations with industry, academic, and government partners, he served for eight years on the U.S. Air Force Scientific Advisory Board, most recently as the science and technology chair. 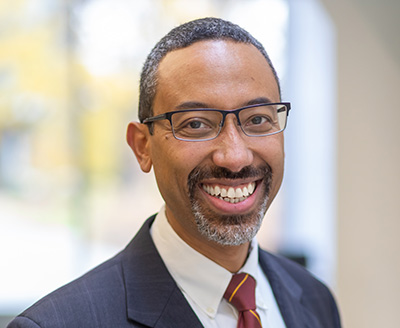 More About Offices and Administration