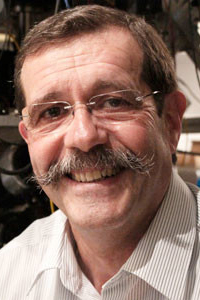 Alain Aspect is a professor at Institut d'Optique Graduate School (Augustin Fresnel chair), and at Ecole Polytechnique, in Palaiseau, France. He is an experimentalist in Atomic, Molecular, and Optical Physics, whose interests bear on basic quantum phenomena. His thesis on experimental tests of Bell's inequalities has settled a debate initiated by Bohr and Einstein 50 years earlier, and marked the start of the vibrant field of quantum information science. This work has been selected as the “Physical Review Milestone Letter” of the year 1981. It has been singled out by innumerable awards, including the 2010 Wolf Prize in Physics, the CNRS Gold medal (2005), the Albert Einstein medal (2012), the Niels Bohr Gold medal (2013), the Balzan prize in quantum information (2013). From 1985 to 1992, he worked on laser cooling of atoms with Claude Cohen-Tannoudji (Nobel laureate 1997), and was instrumental in the invention and demonstration of a new method in laser cooling of atoms (Laser cooling below the one photon recoil), highlighted by the Nobel committee. In 1993, he founded a group at Institut d'Optique, where he still belongs, working on quantum phenomena with ultra-cold atoms, from quantum atom optics to Anderson localization. The paper on the first direct observation of Anderson localization with ultra-cold atoms is his 4th most cited paper, just after the Bell's inequalities papers.

Alain Aspect is a member of several science academies in France (Académie des Sciences, Académie des technologies), USA (National Academy of Sciences), Austria, Belgium, UK (Royal Society) and has received many honorary doctorates. He has served on many evaluation committees, and is still a member of several scientific Advisory Boards in Europe, USA, Australia. He is a senior fellow of the Institute for Advanced Studies of City University in Hong Kong.

You can read more about Dr. Aspect on his Wikipedia page or his École Polytechnique homepage.

Some papers of AA not so easy to find