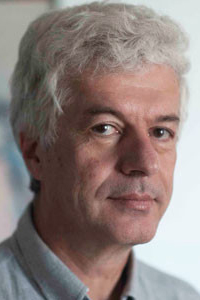 Guy David is a Professor of Mathematics at the Université de Paris Sud, Laboratoire de Mathematiques d’Orsay. His main areas of expertise are in Harmonic analysis, Geometric measure Theory, and the Calculus of Variations. He proved important boundedness results on singular integral operators, was one of the inventors and main developpers of Uniform Rectifiability, proved important results in the direction of the Mumford-Shah conjecture in image segmentation, solved the finite measure case of the Vituskin conjecture on the removability of sets for bounded analytic functions, and more recently works on free boundary problems, the localization of eigenfunctions, harmonic measure on higher co-dimension boundaries, and the regularity of minimal sets (soap films), in particular near the boundary.

He gave an invited talk at the International Congress of Mathematicians, Berkeley 1986,
received the Salem Prize in 1987 with J.-L. Journé, the IBM-France Prize in 1990, the Médaille d’argent du CNRS in 2001, the Ferran Sunyer y Balaguer prize and the Grand prix Servant de l’Académie des Sciences (Paris) in 2004. He is a Foreign honorary member of American Academy of Arts and Sciences since 1999 and was a member of the Institut Universitaire de France twice (Junior and Senior).

He served one term as head of the Laboratoire de Mathematiques d’Orsay, was Director of the analysis team there for a long time, and since 2015 is vice-president in charge of the teaching department.

You can read more on his Université de Paros Sud homepage.