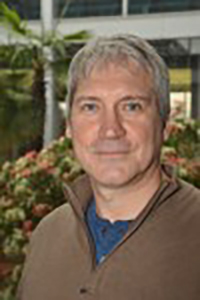 Marcel Filoche is CNRS Research Director in Condensed Matter Physics at Ecole Polytechnique. His research interests are in the physics of complex and disordered geometries, with an emphasis on wave localization and absorption in complex structures, and transport in the pulmonary airway system at the biomedical interface.

He graduated from Ecole Polytechnique in 1985 and obtained his PhD in Physics from Université Paris-Sud Orsay in 1991. Filoche led the group on numerical simulation of III-V semiconductors at France Telecom R&D Center through 1997, developing simulation software which was sold worldwide. In 1997, he joined CNRS and began to study transport properties of the lung airway system, authoring several seminal papers on the physical origin of the sizes and shapes found in the lung morphology, and on relationships between physical transport and lung diseases. In 2005 he was awarded the La Recherche prize for this work. Dr. Filoche continued to connect fundamental physics with practical applications with his work on sound localization and absorption in complex geometrical structures. In 2003 this resulted in the design of a world-record-breaking noise abatement wall, the patented Fractal wall®, winner of the 2003 SIEMENS Prize for scientific innovation, the 2004 Award of the International Road Federation, and the 2008 Optics Valley Prize “Fiber of Innovation”. More recently, Filoche’s research is centered around the theoretical foundations of wave localization, including the game-changing discovery of the localization landscape together with Svitlana Mayboroda in 2012.

Since 2008, Dr. Filoche also serves as head of the Physics Department at Mines Paris-Tech. Among his honors, he was Fulbright visiting professor at the University of Michigan in 2011, and was awarded the Chevalier des Palmes Académiques in 2013. He serves on the Scientific Board of the Cargese School, on the Editing Committee of the “Presses des Mines”, on the Fulbright selection jury (without interruption since 2012), and he is President of the Entrance Jury at EMINES School since 2014.