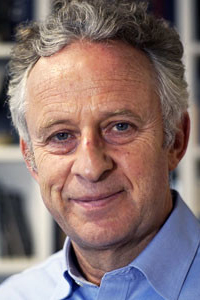 Sir Richard Friend holds the Cavendish Professorship of Physics at the University of Cambridge. His research encompasses the physics, materials science and engineering of semiconductor devices made with carbon-based semiconductors, particularly polymers. His research advances have shown that carbon-based semiconductors have significant applications in LEDs, solar cells, lasers, and electronics. These very surprising findings have been important both for fundamental science, because they reveal new regimes and models for semiconductor behavior, and for real applications that have been developed and exploited through a number of university spin-of companies. The first of these, Cambridge Display Technology, now part of the Sumitomo Chemical Company, developed fully printable organic LEDs for use in high resolution displays that are now commercialized and used in current OLED displays. His current research interests are directed to novel schemes – including ideas inspired by recent insights into Nature’s light harvesting – that seek to understand and improve the performance and cost of solar cells.

Professor Friend is a Fellow of the Royal Society and of the Royal Academy of Engineering, and a Foreign Member of the US National Academy of Engineering. He has received many international awards for his research, including Laureate of the Millennium Prize for Technology (2010) the Harvey Prize (2011) of the Israel Institute of Technology and the von Hippel Award of the Materials Research Society (2015). He was knighted for "Services to Physics" in the Queen's Birthday Honours List, 2003. He is currently principal investigator on a major EPSRC Programme Grant and holds an ERC Advanced Investigator Award.

Photogeneration and recombination of charge in molecular semiconductors.

We and others have developed architectures for molecular semiconductor solar cells can allow high quantum efficiency. We have recently investigated how electrons and holes can separate far enough and fast enough to prevent their mutual electrostatic attraction causing them to recombine We have developed new time resolved laser spectroscopy techniques in my group and these have allowed a real breakthrough in understanding [1,2]. We find that in those materials systems that allow efficient charge separation there is very rapid (< 40 fsec) quantum coherent electron motion across many (>10) molecular units. This is a new paradigm for molecular semiconductor science, relevant also for processes in photosynthesis. Electron spin plays an important role in the process of electron-hole recombination in both photovoltaic diodes, PVs, and light-emitting diodes, LEDs. We investigate the formation of spin-triplet excitons, finding that they can limit both PVs and LEDs but that formation can be controlled by kinetics rather than thermodynamics, allowing improved solar cell performance [3].

We are just starting an ERC-funded project, EXMOLS, in which we will develop a new platform to study and control electronic excitations in extended molecular systems using DNA assembly methods to construct functional molecular semiconductor stacks. DNA- assembly takes the place here of the protein structure assembly of chromophores within photosynthetic systems. In contrast to current synthetic molecular systems that have little control beyond simple heterojunctions, these DNA-assembled structures will allow for the precise placement of molecules within stack-structures of dimension 5 nm or more, which will allow for the definition of precise electronic couplings and energetic landscapes, within extended artificial molecular systems. New transient optical spectroscopy will track wavefunction evolution from 10fs. These will allow for the study of a range of emergent electronic phenomena on the 5-100nm length scale including, charge delocalisation, coherent electron-hole separation, singlet exciton fission, resonant energy transfer across the organic-inorganic interface and topologically protected electronic excitations.

The excited state energy spectrum for some molecular semiconductors (particularly pentacene and tetracene) gives a photogenerated spin singlet excited state (or, exciton) with sufficient energy to split into a pair of spin triplet excitons. I started a programme of work on this phenomenon in 2009, showing that the process can be extremely fast (< 100 fsec) and thus very efficient. In the past three years we have explored regimes for the operation of the fission process [1-3] and shown that the triplet excitons generated from this process can be converted to electron-hole pairs at a suitable heterojunction [4] or transferred to a luminescent nanocrystalline inorganic semiconductor [3]. This recent work establishes the process of singlet exciton fission as a very promising route to raise single-junction solar cell efficiencies above the 33% set by the Shockley-Queisser limit. In particular, it may provide a means to increase the efficiency of standard silicon solar cell, by converting photons above 2.2 eV (in the visible part of the spectrum) to pairs of excitations at the silicon bandgap at 1.1 eV.

LEDs and lasers based on lead halide perovskites.

Lead halide perovskites have recently been found to provide unexpectedly efficient thin-film solar cells. We have looked instead at their light-emitting properties, working with Henry Snaith (Oxford), who has pioneered the solar cell developments. We find that these materials show remarkably efficient luminescence and have been able to make efficient LEDs (green, red and IR at present) and optically-pumped lasers.