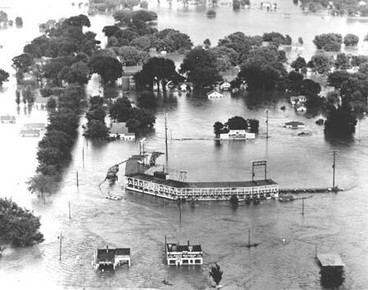 This 5-year, $10 Million project was funded by an award from the National Science Foundation's Expeditions in Computing program. The program, established in 2008 by NSF's Directorate for Computer and Information Science and Engineering (CISE), is aimed at pushing the boundaries of computer science research.

Climate change is the defining environmental challenge facing our planet, yet there is considerable uncertainty regarding the social and environmental impact due to the limited capabilities of existing physics-based models of the Earth system. Consequently, important questions relating to food security, water resources, biodiversity, and other socio-economic issues over relevant temporal and spatial scales remain unresolved.

How we worked with Researchers

Because of the sheer size of data involved in this type of satellite imagery, the resolution of just one display was too small, so CSE-IT staff built a display system that was made up of 12 displays in 3x4 orientation.  The display system was managed by a cluster of six computers that could display content at 30 frames per second with custom software written by CSE-IT staff.

"CSE-IT was instrumental in building a display system that allowed us to visualize complex spatial and temporal data that we were creating and analyzing as a part of our NSF funded Expedition in computing  project on  understanding climate change using data."

This Expeditions project addressed key challenges in the science of climate change by developing methods that take advantage of the wealth of climate and ecosystem data available from satellite and ground-based sensors, the observational record for atmospheric, oceanic, and terrestrial processes, and physics-based climate model simulations. These innovative approaches help provide an improved understanding of the complex nature of the Earth system and the mechanisms contributing to the adverse consequences of climate change, such as increased frequency and intensity of hurricanes, precipitation regime shifts, and the propensity for extreme weather events that result in environmental disasters. Methodologies developed as part of this project will be used to gain actionable insights and to inform policymakers.